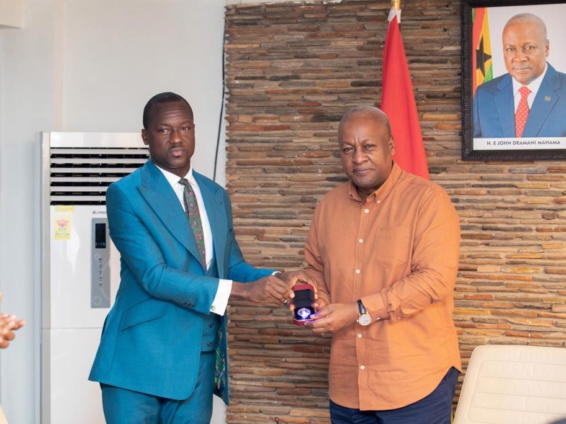 Former President John Dramani Mahama has said the Asantehene, Otumfuo Osei Tutu II was instrumental in the country securing an extended credit facility from the International Monetary Fund (IMF) in 2016 to strengthen the economy.

Receiving the Otumfuo Commemorative Gold Coin at his office in Accra on Tuesday, February 8, 2022, he said when his government faced crisis with the economy in 2013 and 2014, Otumfuo was at hand to rescue the situation.

Giving details, former President Mahama said, “We had implemented the single spine salary policy from President Mills’ time and somewhere in 2013, the arrears were kicking in. So we overshot in terms of revenue which became a burden on the budget. Wages and salaries shot up astronomically so we did the Senchi forum and after that, we came out with the Home-Grown Fiscal Consolidation Programme.

“We tried to implement it but international investors thought that without discipline we could not do that. We tried to convince them but they would not budge,” he stated.

According to him, government, then, decided that to get the credibility, it needed to go to the IMF to buy into the implementation of the home-grown fiscal programme.

But the former President indicated that when his administration wanted to talk to the IMF, they kept delaying them.

Former President Mahama said during a visit to Kumasi, he called on Otumfuo Osei Tutu to enquire from him whether he could get his friend, the President of the World Bank, Mr. James D. Wolfensohn, to work on the IMF programme for the government and the Asantehene readily accepted the request.

“Because of that programme, he (Otumfuo) flew to Washington to have talks with Mr. Wolfensohn, who together with Otumfuo went and spoke with the IMF Director, Madam Christine Lagarde and within a short period of time, we had the Extended Credit Facility.

“That was the programme that turned the economy around because under that programme, in 2016, almost for the first time in our history, we did not overspend our budget,” Mr. Mahama said.

Again, Mr. Mahama said he has had a personal relationship with Otumfuo, dating back to the days when the King was a student at the Sefwi Wiawso Secondary School.

“Certainly, if anybody was to be celebrated in this country, you couldn’t go past Otumfuo. He has been a part of consolidating our democracy since the time of President Rawlings,” adding that “Otumfuo gives good counsel at all times especially during times of crisis.”

Emphasising that he could go ahead to say many good things about Otumfuo, the former President said on the Dagbon conflict, he was the prime mover in terms of settling the crisis and that also hinged on the historical link between the Asante Kingdom and the Dagbon as well as Dagbon and the Gonja and Mamprusi.

“So we are proud of him and we are happy that this coin has been issued,” former President Mahama said.

In his briefing, the General Manager of the E ON 3 Group, Mr. Jesse Agyepong, said it was appropriate that Mr Mahama was presented with the gold coin since he played a part in the resolution of the Dabgon conflict while as President.

He said the gold coin was a life-long project that would build on the country’s cultural heritage.