Our focus is to engage the Ministry of Education for reforms not WAEC – Kofi Asare - MyJoyOnline.com 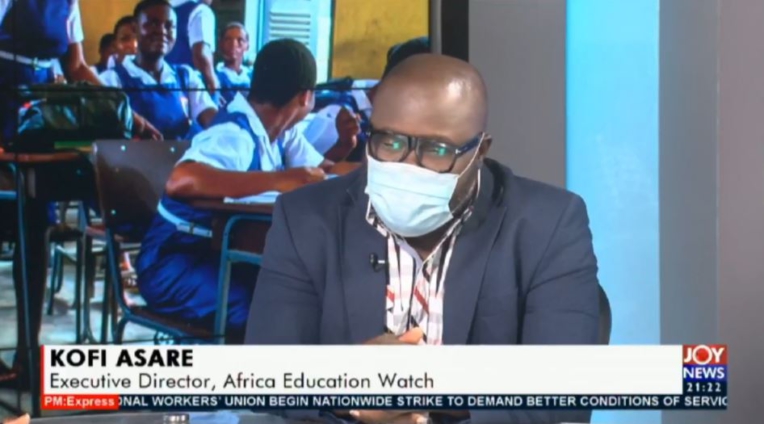 The Executive Director of Africa Education Watch, an education think tank, Kofi Asare has said its objective for monitoring WASSCE examinations is to engage the Ministry of Education and proffer reforms to strengthen the examination question value chain.

According to Kofi Asare, the Ministry of Education is the only agency with the mandate to reform the educational system.

“I keep saying that our target is not WAEC, because we expect that everything we write will be denied by WAEC. WAEC cannot reform the system.

It is never our objective to engage WAEC to reform itself, our only objective is to gather evidence, make recommendations and engage the Ministry of Education, the only agency that has the mandate to initiate the reforms that will lead to strengthen the security system of the question value chain, not of WAEC alone, but also NABPTEX and other examining bodies whose questions are being sold in the open market,” he said.

The Public Relations Officer of the WAEC, Mrs. Agnes Teye-Cudjoe at a press briefing on Friday indicated that three schools cited in the report by Eduwatch as having been involved in examination malpractices did not participate in the just ended WASSCE exams.

Speaking in an interview on The Pulse on JoyNews, on Friday, Mr. Asare noted that the three schools the WAEC mentioned as having not taken part in the exams, were not captured in the findings of the report although they appeared in the appendix of the report.

“We did not cite those schools in any of the findings of the report. We will take note of the final publishing of the mass report. We are going to monitor the typo in the appendix. We are yet to print mass copies of the report, when we print it, we will factor that in,” he explained.

He clarified that Kikam Senior High School was captured because Eduwatch monitored NABPTEX exams as well since Kikam is a technical school.

He added that the findings have been submitted to various stakeholders. “If WAEC has issues with the technical aspect of the research, we are happy to discuss and respond. We have the evidence, we submitted to Parliament, WAEC was there, GES leadership was there, the Minister was there, head teachers were there, we submitted the same evidence to the Ghana Police, if WAEC says it didn’t leak, we leave it to WAEC,” he noted.