Over 30% of countries at near-debt distress – IMF Boss 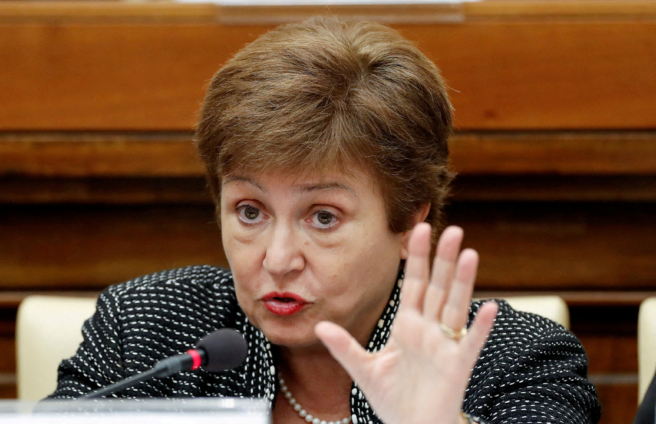 More than 30% of emerging and developing countries are at or near debt distress, Managing Director of the International Monetary Fund, Kristalina Georgieva, has revealed.

For low-income countries that number is 60%.

According to her, the tightening financial conditions and exchange rate depreciations has escalated the debt service burden which she described a harsh – and for some countries – unbearable burden.

Speaking at the hybrid meeting of the G20 Finance Ministers and Central Bank Governors, Madam Georgieva said the outlook of the global economy has darkened significantly, and uncertainty is exceptionally high, adding, “downside risks about which the IMF had previously warned have now materialised”.

She therefore wants a strong global leadership to tackle the scourge of high debt, which has reached multiyear highs.

“The war in Ukraine has intensified, exerting added pressures on commodity and food prices. Global financial conditions are tightening more than previously anticipated. And continuing pandemic-related disruptions and renewed bottlenecks in global supply chains are weighing on economic activity.”

“As a result, later this month, we will project a further downgrade to global growth for both 2022 and 2023 in our World Economic Outlook Update. Moreover, downside risks will remain and could deepen—especially if inflation is more persistent—requiring even stronger policy interventions which could potentially impact growth and exacerbate spillovers particularly to emerging and developing countries. Countries with high debt levels and limited policy space will face additional strains. Look no further than Sri Lanka as a warning sign”, she added.

Emerging and developing countries have also been experiencing sustained capital outflows for four months in a row. They now suffer the risk of reversing three decades of catching up with advanced economies and instead falling further behind.

The MD of IMF said first countries must do everything in their power to bring inflation down, adding, “failure to do so could risk the recovery and further damage living standards for vulnerable people”.

She expressed excitement that central banks are stepping up their game.

“Monetary policy is increasingly synchronised: more than three-quarters of central banks have raised interest rates and have done so 3.8 times. Central bank independence is critical for the success of these policy actions, as is clear communication and a data-driven approach.”

Secondly, she said fiscal policy must help but not hinder central bank efforts to tame inflation.

Thirdly, Kristalina Georgieva said, a fresh impetus for global cooperation will be critical to confront the multiple crises the world is facing. We need G20 leadership particularly to address the risks from food insecurity and high debt.