Over 90 persons killed in motorcycle crashes in August 2021: Analysis 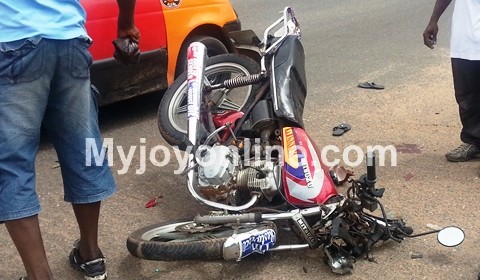 The current MTTD update on road traffic crashes reveals that 93 lives were lost and 400 persons got injured in motorcycle crashes in August, 2021.

The Motor Traffic and Transport Department (MTTD) of the Ghana Police Service has disclosed that the figure is a subset of the total number of 221 lives that were lost in the month under review to road crashes generally.

This means deaths from motorcycle crashes alone accounted for more than 42 per cent of the total number of deaths recorded as a result of road traffic crashes in August, 2021.

Although ‘motorcycle crashes’ was the least in terms of type of vehicle involved, it recorded the highest number of deaths.

A comparative analysis by the Joy Research Desk reveals that of the 2,158 vehicles involved in accidents during the month under review, 488 of them were motorcycles with 1,670 others being commercial and private vehicles.

In all, there were 951 commercial vehicles involved with a death toll of 55 and 276 injuries.

A total of 719 private vehicles involved in accidents, recorded 74 deaths and 622 injuries.

Additional breakdown from the Motor Accident Returns in August, 2021 are as follows: