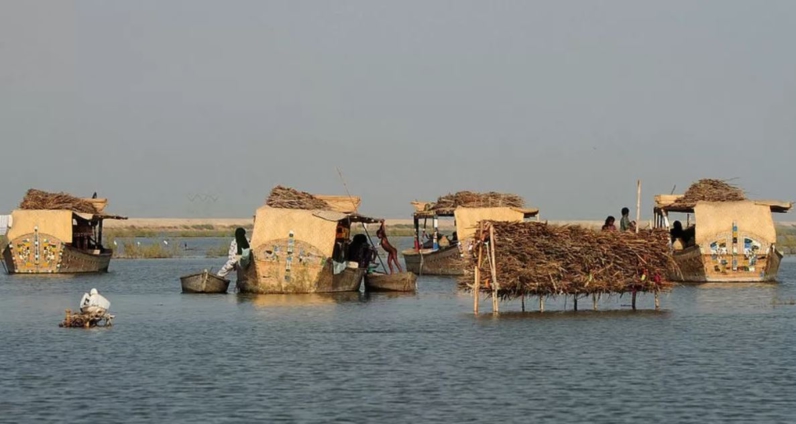 [Getty Images] Pakistan's biggest lake, Manchar Lake, is on the verge of bursting its banks and flooding surrounding areas

Pakistani authorities are struggling to stop their biggest lake from bursting its banks after last-ditch attempts to lower water levels failed.

Manchar Lake, in Sindh province, is dangerously full after record monsoons that inundated a third of Pakistan.

Three breaches of the lake’s banks so far – two to protect areas nearby – have displaced over 100,000 people.

But it could still overflow and rescue teams are racing to evacuate many more people who remain at risk of drowning.

Floods in Pakistan have affected some 33 million people and killed at least 1,314, including 458 children, Pakistan’s National Disaster Management Agency said.

Estimates suggest the floods have caused at least $10bn (£8.5bn) of damage.

Sindh province produces half of the country’s food supply, exacerbating fears of serious food shortages in a country already struggling with an economic crisis.

On Sunday, officials breached Manchar lake after it had flooded two rural towns. The hope was the move would prevent it from further bursting its banks and inundating more densely-populated areas.

The move affected an estimated 400 villages – a total of 135,000 people. The decision to deliberately flood some villages is a controversial one – the lake straddles two districts, Dadu and Jamshoro, both home to hundreds of thousands of people, and about 80% of the region is underwater.

Now residents near the lake are using government machinery to strengthen embankments to try to avoid a catastrophic, unplanned overspill.

“There are three breaches in the lake, two by plan, one is unplanned breach. It is our target that our big cities, towns, we can save them,” Sindh’s minister of irrigation Jam Khan Shoro told the BBC’s Newshour programme.

Villagers were warned to evacuate before the planned breaches. But local sources say not everyone was taken to safety in time – some didn’t want to leave their homes or livestock, a lifeline for many in rural communities, and there are few places for them to go.

The military has been brought in to help with evacuations but mostly locals are coming to each other’s aid.

Some who’ve left their homes in the last few days ahead of the Manchar breach were taken to a nearby government-run facility that’s being used as a shelter for the displaced, but the conditions leave much to be desired.

Many displaced people are living on the roadside without shelter, food or clean drinking water.

“We have we got nothing here, we try to find food for our kids all day, some nights we sleep without food,” one woman told the BBC.

“We are scared that the roof may collapse on us – it’s damaged,” another villager said. “Our children are getting sick and we’ve been sleeping on the floor – there aren’t beds for many of us.”

Officials have said a little over a quarter of a million people are in shelters, a fraction of the 33 million Pakistanis affected. Relief efforts can’t keep pace with demand – there is simply too much need and too few resources.

Damaged infrastructure is also hampering aid and rescue operations. Some connecting roads in Sindh province have either collapsed, are flooded or are backed up for days with queuing traffic.

Pakistan is facing one of its worst climate-induced natural disasters in years, as record torrential rainfall and melting glaciers in the country’s northern mountains have caused devastating floods.

Meanwhile, UN children’s agency Unicef said more children were at risk of dying from disease in Pakistan due to the shortage of clean water.

The disaster has also highlighted the stark disparity between countries that are the largest contributors towards climate change and countries that bear the brunt of its impact.

Pakistan produces less than 1% of global greenhouse gas emissions but its geography makes it extremely vulnerable to climate change.

DISCLAIMER: The Views, Comments, Opinions, Contributions and Statements made by Readers and Contributors on this platform do not necessarily represent the views or policy of Multimedia Group Limited.
Tags:
Floods
Pakistan