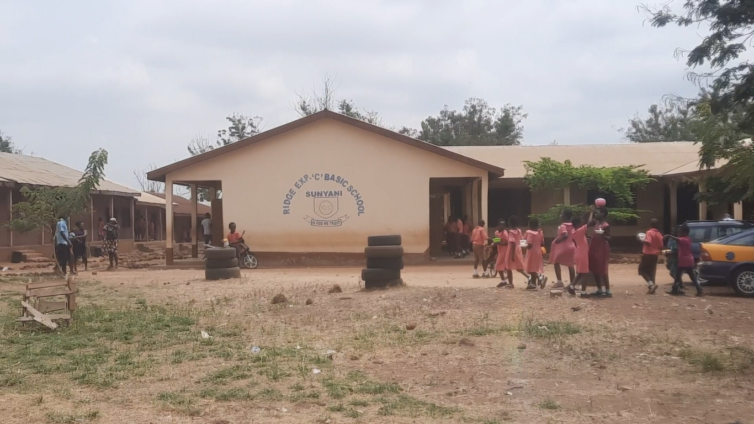 Portion of school that could be affected by demolishing

Aggrieved parents of the State-owned Ridge Experimental cluster of schools in the Sunyani Municipality of the Bono Region say they will resist attempts by some people to encroach their lands further.

According to the parents who have threatened to demonstrate against the encroachers and city authorities, the activities of influential and politically connected individuals would affect the teaching and learning of over 2,000 students.

At a charged emergency Parent Teachers Association, PTA, meeting, the parents appealed to the government to help stop the encroachers from demolishing about half of the school’s buildings.

Established in 1960, Ridge Experimental cluster of schools sits on an approximate land size of 2 miles square, and it is a few meters away from the Bono Regional Coordinating Council in Sunyani.

The 4 model schools, grouped in A, B, C, and D, each has crèches, nursery, kindergartens, primary and Junior High Schools.

A source in the school intimated that the alleged owner and his lawyers showed them their leased documents on the land and threatened to wipe off about half of the school for private development, a situation which triggered the emergency PTA meeting to deliberate on the way forward.

Yaw Brenya, a member of the School’s Management Committee, in an interview, said they noticed that the school’s land continue to be rezoned and portions sold to some influential people at the expense of the education of their children.

“They intend to construct a road and demolish about 5 School blocks, and we will lose about half of the current land”, he worriedly said.

“It is going to affect the whole institution because the school is progressing, and if they encroach, our land would diminish. We want to put an end to that”, another parent, Collins Kena, averred.

The PTA chairman for the Ridge Cluster of schools, Elder C.K. Gyamfi,  said they are even building more classroom blocks for the growing number of students, and they cannot afford to look on unconcerned for the encroachers to demolish the existing ones.

“They said Rasheed, the NADMO coordinator, is the one doing that. He has threatened the school’s security and teachers to move away because he is bent on developing his land”, the chairman alleged.

“We will resist the encroachment with all our might”, he insisted.

He said for the benefit of generations yet to come, they are pleading with city authorities, the government led by President Akufo-Addo, to help them protect the land for future expansion work.

“If we don’t get the help required and they demolish the buildings, then I will say Sunyani will not vote again. And in a week or two, we will stage a demonstration with our children”, the SMC member, Yaw Brenya, again said.

Meanwhile, the aggrieved parents also truncated their meeting and marched to the Regional Minister, Justina Owusu Banahene’s office for her support.

She thanked the parents for their decision to come to her office to discuss the situation and promised to engage the key stakeholders, including the Sunyani Traditional Council and the Lands Commission, for a lasting solution.

DISCLAIMER: The Views, Comments, Opinions, Contributions and Statements made by Readers and Contributors on this platform do not necessarily represent the views or policy of Multimedia Group Limited.
Tags:
Bono Region
Ridge School