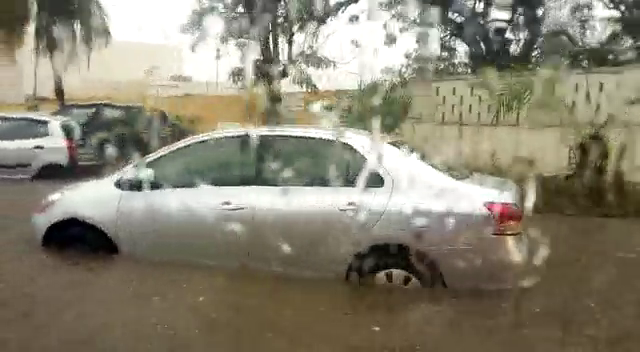 Some areas in Accra have flooded after a heavy rainfall on Friday, April 8.

The one-hour heavy rainfall, obstructed the flow of vehicular traffic on the Weija Barrier – West Hills Mall stretch of the Kasoa Highway, Central Business District, Sahara and Odawna, among other areas.

While many commuters parked their cars for the rain to subside, others carefully drove through the flood which covered most part of the road.

Gridlock on the Weija-Kasoa road as parts of it remain impassable.

The Ghana Meteorological Agency had already predicted a thunderstorm on Friday, a few hours before the rain.

“Moderate to heavy Thunderstorm and Rain Activity detected along the coast of the Volta Region at 8:30 am is expected to affect much of the southern parts of the country in the coming hours,” the agency warned in a brief report.

Some Ghanaians have taken to social media to share the flooding situation in their areas.

@NAkufoAddo you should be worried about this, the flood issues in Accra is really bad.

On a more serious note, we need to have a conversation on this Accra floods. It’s disgraceful and inhumane

DISCLAIMER: The Views, Comments, Opinions, Contributions and Statements made by Readers and Contributors on this platform do not necessarily represent the views or policy of Multimedia Group Limited.
Tags:
Flood
Ghana Meteorological Agency (GMet)