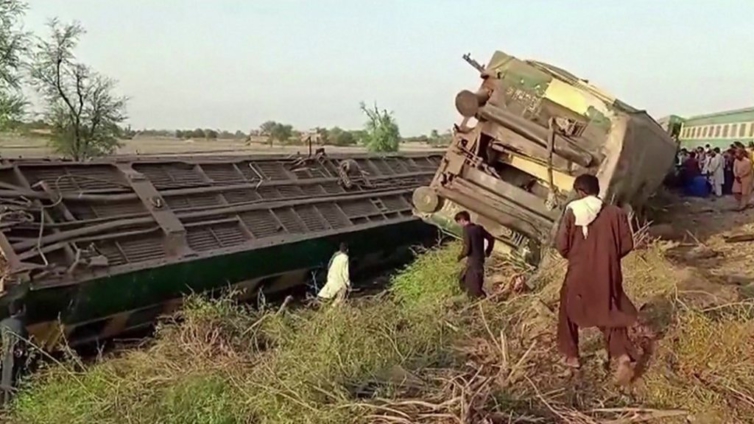 Officials said that one train travelling in Sindh province had derailed and landed on another track. A second train packed with passengers then collided with it and overturned.

Rescue teams took the injured to nearby hospitals and it is thought that several are in a critical condition.

Pakistan has seen a string of deadly train accidents over the past years.

A senior official in the Ghokti district, Usman Abdullah, told Reuters news agency it was hard to know how many people were still trapped in the train.

“There are about six to eight bogies [carriages] that are totally smashed… there is a sleeper train, AC [air conditioned] class, as well as economy class, in which there were between 47 to 50 people on this side and around 50 to 60 people on the other train,” he said.

Prime Minister Imran Khan said he was “shocked” by the accident and promised a full inquiry.

Footage from the site shows the wreckage of several carriages lying on their side. It is not clear what caused the derailment.

Several people are though to remain trapped. News agency AFP quoted a railway spokesperson as saying: “The site is far and that’s why we are facing some trouble in the rescue work.”

Hospitals in the area have been put on emergency alert to deal with the casualties.

Local media have cited officials as saying that a relief train has been dispatched to the crash site while helpline centres have been set up for passengers.

Ghotki Deputy Commissioner Usman Abdullah said at least 30 people had been killed while 50 others had been injured in the incident. https://t.co/U8hhYVwlND

Railway accidents are not uncommon in Pakistan, often caused by derailment and collisions at unmanned railway crossings.

Train travel is an extremely popular mode of travel in the country, especially among middle and lower income groups, with tracks spanning the length and breadth of Pakistan.

However, carriages are often overcrowded and many of the trains are in poor condition.

Last July 21 people were killed near Sheikhupura, Punjab province, when a train travelling from Karachi to Lahore hit a van carrying Sikh pilgrims.

In October 2019 a fire caused by a gas cylinder killed more than 70 passengers on a train travelling from Karachi to Rawalpindi, and another 20 people were killed in a train crash a few months earlier, in July 2019.

Data from Pakistan Railways shows there were 757 train accidents between 2012 and 2017 – an average of about 125 incidents a year.

According to the authorities, the three major causes of train accidents in Pakistan are lack of track maintenance, signal issues and older engines.

Casualty figures are often high because trains are packed with far greater numbers of passengers than they were designed for.