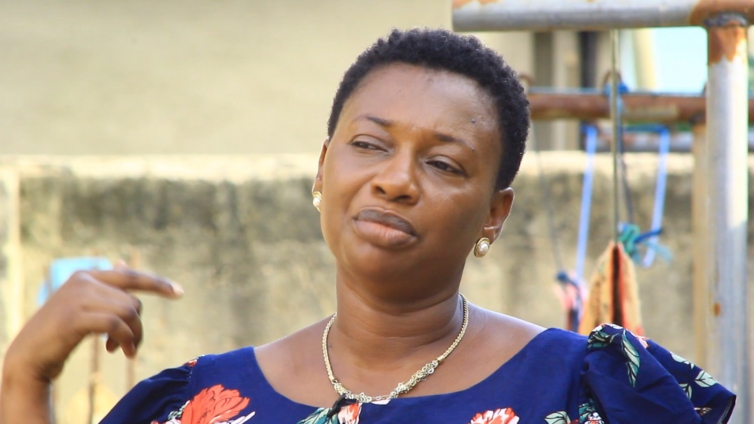 Imagine being in excruciating pain, constantly worn out and exhausted. That’s what it feels like living with sickle cell anaemia, an inherited blood disease.

Ama Nyarko Attafuah Quainoo, 49, has had the disease for nearly five decades and says life has never been the same since she was a young child.

However, the mother of two says she has no regrets about having sickle cell illness because it has given her the opportunity to help others.

Living with sickle cell disease for 49 years and marrying for seventeen years is a testament to how the disease fosters unity and love among patients’ partners.

“It has never been easy growing up. But I have much to be grateful for,” she said

For the past 24 years, she has taught a variety of disciplines.

Even though she struggles to keep in shape, she also ensures that the lives of others, such as her students, are properly molded for a better society tomorrow.

Mrs. Attafuah-Quianoo has had to use creative methods to modify kids’ conduct for the better in the past.

She gave the example of a student who bullied both teachers and students. Mrs. Attafuah-Quianoo said their Business Management teacher at the time, had to hire the student as a bodyguard to keep him in class.

“I got to know it early in life and have been managing it.”

Despite the diligent management of her illness and nutrition, difficulties occur.

People with sickle cell illness have vivid descriptions of pain crises, but Attafuah-Quainoo refuses to let the affliction limit her.

She is thankful for many things in her life, including her loving family and supportive colleagues at work.

She has found an enduring love and stays hopeful that what she is made of will not shatter her into pieces despite the uncertainties surrounding cultivating relationships, including marriage.

Mrs Attafuah-Quianoo expressed her sorrow at the death of a sickle cell patient friend during the 2020 lockdown due to the Covid-19 pandemic.

He had the most severe sickle cell illness, according to her, with skin cancer strewn across both legs.

He claims that he has no regrets about marrying her because it is a privilege to marry such a lovely woman.

Sickle carriers include her 16-year-old son and 14-year-old daughter.
They have no regrets about their situation.

“My husband is AA so both of them are carriers. Sometimes, my son complains of pain around his wrist and feet.”

With over 200,000 newborns born each year, sickle cell disease is a major public health concern in Africa. According to statistics from 2018, roughly 15,000 (2%) Ghanaian babies are diagnosed with SCD each year.

The number of children born with sickle cell disease is anticipated to increase by 30% globally between 2010 and 2050.

As a result, a multidisciplinary approach to SCD patient care is critical.

The sickle cell gene was first discovered thousands of years ago in locations where malaria was and is now prevalent. Sickle cell anemia is primarily found among African people.

Due to its origin in Africa, sickle cell anemia mainly affects people of African origin. The sickle cell gene was discovered to have the ability to protect people from malaria.

One normal haemoglobin gene and one sickle cell gene are present in people with sickle cell traits.

It is the most common blood gene disorder on the planet and is a hereditary condition.

Dr. Cosmos Bimpong, a clinical nutritionist and medical scientist at the Sermons Herbal Clinic, has raised awareness of sickle cell disease among the general public.

According to Dr. Bimpong, the condition is both lethal and harmful to several essential organs, such as the heart and kidneys.

According to the medical scientist, when a child has sickle cell, the red blood cells divide and the sickle cell blood becomes trapped and unable to flow freely, causing pneumonia, rheumatism, and joint problems, as well as retarding growth.

Most people with sickle cell illness hide it because of the stigma attached to it. Mrs. Attafuah-Quainoo, on the other hand, believes that rather than negativity, people need to comprehend the sickness.

She noticed that most sickle sufferers are unaware of the disease during her regular visits to health facilities. “Their parents have no idea about the disease. All that they know is, that their children frequently get sick and they send them to the hospital.

She encourages sickle cell patients to advocate for themselves and to let their strength inspire others.

So far, the foundation has reached over 10,000 people in schools, communities, and churches.

“We have been to many schools including Prempeh College, Simms SHS, KSHTS, Aduman SHS etc.”
Since 2014, the foundation has spent over $50,000 on advocacy and supplied thousands of people with free health screenings.

“So far we have been to Ahafo and Ashanti regions we hope to capture the whole country.”

Mrs. Attafuah- Quainoo’s resources and the generosity of others are their main sources of funding.

Overcrowding, healthcare workers’ lack of expertise with recommendations for treating the condition, poor communication among healthcare providers, and the stigma and medical bias associated with sickle cell all contribute to people with sickle cell not obtaining consistent care in emergency rooms.

Sickle cell disease can have a significant impact on quality of life, from hospital expenditures and lost time to medical bias issues. As individuals and as a culture, we must begin to think differently about sickle cell and its underlying cause.