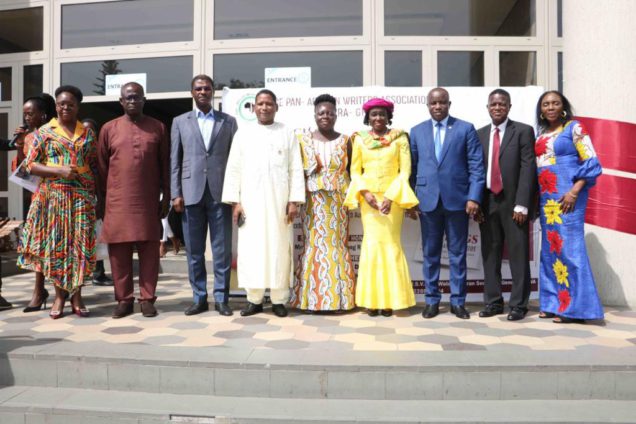 Former First Lady, Nana Konadu Agyeman-Rawlings has urged Africans to take charge of their own history and to ensure the lessons and inspirations from such history are inculcated in the youth to guarantee the development of the continent.

The former First Lady, who was the Special Guest of Honour at the launch of a book on President Jerry John Rawlings on Tuesday, said our society is defined by how accurate our history is, as well as the mediums we create to disseminate such history.

Mrs. Nana Konadu Agyeman-Rawlings, who spoke at the launch of ‘JJ Rawlings, Memories and Mementos’, a collection of poetry and essays put together in tribute to President Rawlings by the Pan-African Writers Association (PAWA), said the former President inspired many on the continent and beyond. She described as heartwarming, the fact that members of PAWA did not hesitate to write down their emotions over the sudden loss of a formidable African personality.

Speaking at the book launch held at Accra City Hall, the former First Lady said, “One of our weaknesses as a continent, is our failure to adequately record the positive achievements of our sons and daughters, often leaving others from outside the continent who may not appreciate and identify with our unique culture and ideals, to write biographies about Africans who have impacted positively on the continent.”

Mrs. Agyeman-Rawlings, who was accompanied by three of her children, Yaa Asantewaa, Amina and Kimathi Agyeman-Rawlings, said the book launch was a manifestation of the impact President Rawlings had on many across the continent. What is written in the book, she noted, is reflective not only of the authors, but of their various societies and communities.

She commended PAWA for their “wonderful” effort and urged them to contribute more to the history of the continent by “recording our story and culture in a candid manner for all to learn from.”

Minister of Defence and Member of Parliament for Bimbilla, Dominic Nitiwul, who represented President Nana Addo Dankwa Akufo-Addo at the launch, paid tribute to Former President Rawlings, highlighting his immense contribution in the areas of political stability and competent economic management.

He also recounted education and cultural development as well as the entrenchment of moral values in Ghana by the late President as quite remarkable.

The Defence Minister said: “It is important to note that, many of these landmark achievements were not limited to Ghana but also, to other African countries such as Liberia, Togo, Nigeria, Ivory Coast, Malawi, South Africa to name just a few.”

He said government urges all with creative minds to write books that will portray to the world our culture and maintain the unique identity of Ghanaians. He announced that as part of its effort to improve the standard of education in the country and reduce the endemic problem of a Poor Reading Culture, the Government has made adequate provisions in the 2022 Budget towards the Ministry of Education and its various agencies.

While congratulating PAWA for its book, Mr Nitiwul said President Akufo-Addo is happy to associate his government with the activities of the Association.

He said Ghana’s hosting of PAWA for 30 years represents its strong belief in the power of literature and culture as important tools for African unity.

“Ghana will continue to give its full support to PAWA so that the Literary Continental body can fulfil its objectives as enshrined in the Association’s constitution,” Minister Nitiwul stated.

Dr. Theresa Addai-Mununkum of the University of Cape Coast, who reviewed the book, said it was a great initiative in keeping alive Africa’s heroes.

“Apart from encouraging up-and-coming heroes to continue with the struggle to make life better for all Africa, the collection serves as a historical account of the life and times of J.J. Rawlings for young Ghanaians and other Africans who would otherwise not hear or read about JJ. Rawlings and what he did for Ghana, and Africa,” Dr. Addai-Mununkum said.

General Secretary of PAWA, Dr. Wale Okediran in his welcome address, said when the call for contributions towards the book was made, the response was spontaneous and overwhelming.

“At the end, we settled on 52 contributors from 12 different countries who wrote in French and English.”

Dr. Okediran said the exercise of coming out with the book has made it obvious the influence and popularity of President Rawlings is not limited to Ghana alone, but to the world at large.

He added that “Even though President Rawlings was not a writer or a poet per se, by establishing the Pan African Writers Association, he became the father of writers and poets and so, is worthy of being celebrated.”

The book was launched by UNESCO Representative in Ghana, Mr. Abdourahamane Diallo, who also wrote the foreword to the book.

He purchased the first ten copies of the book while the Government of Ghana procured fifty copies for the Jerry John Rawlings Foundation.

Below are more pictures from the book launch