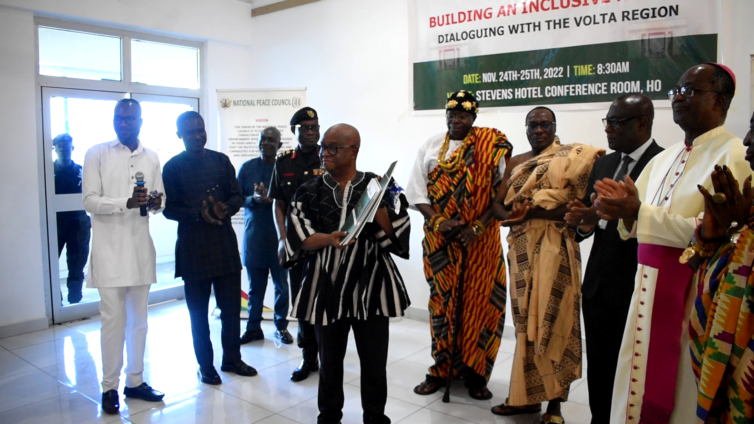 The Council which had undertaken a wide consultation in the Volta and Oti Regions, has put together a report and recommendations which would serve as a working document in addressing the concerns.

Following concerns of ethnic identity-based discrimination raised by the chiefs and people of Ewe origin in the Volta and Oti Regions, the National Peace Council embarked on a consultation drive to promote peaceful coexistence in the country.

With support from National Security, consultative forums were organised in 18 selected communities in both regions to ascertain the origin, sources, nature, salience, and implications of the claims.

The National Peace Council, therefore, drafted a report on the concerns, with recommendations to serve as guidelines in dealing with the issues.

Speaking at a stakeholders forum to launch the drafted report, the Mifiaga of Anlo and Paramount Chief of Kome/Shime, Torgbui Nyaho Tamakloe VI, corroborated these claims and indicated that successive governments have deliberately deprived the regions of economic growth.

He entreated Ewes living in and outside the regions and Ghana to contribute to developing the region, and expressed hope in their capabilities.

“What we ask for is fair treatment of our people, fair distribution of the economic wealth of our country, fairness and the dignity of our people. The self-esteem of every living child must be promoted”, he illustrated.

“This path that has been chosen I believe, will augur well for all of us, but it is not about romance, it is serious business. We don’t give you a report and then you sit on the report and you start dancing kpanlogo around that report. The implementation of every element of the report is important for our people”, Torgbui Nyaho Tamakloe stressed.

He said that the alleged marginalization of the Ewe ethnic group dates back to 1956, following the plebiscite which saw the unification of the then Western Togoland and other territories to form Ghana.

He chronicled how ethnic discrimination and marginalization led to conflicts in the West African sub-region due to “denial of tangible human needs”. He promised to ensure fair and equitable distribution of national resources during his days in government.

He expressed appreciation for the various recommendations contained in the report.

The National Coordinator of the Ghana Boundary Commission, Major General Kotia, who spoke on behalf of the National Security Minister, entreated the relevant institutions to endeavour to maintain the peace in Ghana, and assured of the government’s commitment to dealing with the claims.

The stakeholders have appealed to the state agencies to implement the recommendations contained in the report to ensure peace and stability.

DISCLAIMER: The Views, Comments, Opinions, Contributions and Statements made by Readers and Contributors on this platform do not necessarily represent the views or policy of Multimedia Group Limited.
Tags:
Ewes
National peace council
National Security
Oti Region
Volta Region