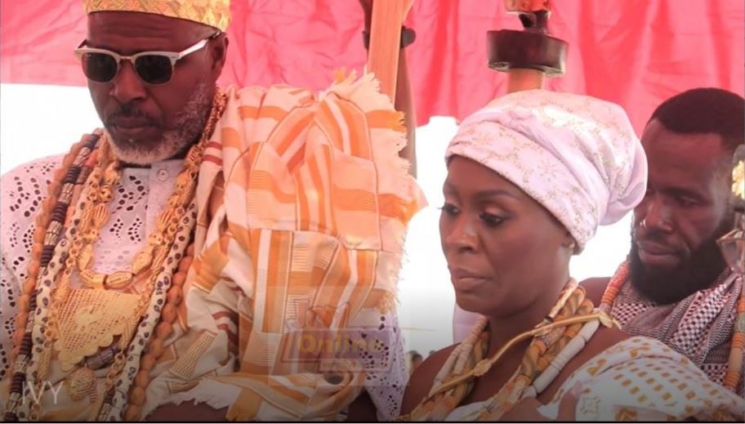 A Lawyer known in private life as Ephraim Agbeko Vordoagu and an entrepreneur and media personality, Mrs Confidence Haugen have been outdoored as Torgbuiga Wenya III and Mamagah Abui Buiekpor II respectively.

Their installation took place during a colourful ceremony held in Tegbi in the Anloga District of the Volta Region.

Torgbuiga Wenya III who is now the Dutor of Anlo said his dream is to help the Awormefia of Anlo and the Chiefs to have a university built in the Anlo State.

He noted that it is very necessary and important to have a university in the Anlo land, especially an ICT-based university which can help equip the youth with skills in that field.

He said instead of the youth having to travel out of the town to have tertiary education, they will rather receive it in the Anlo land.

He said university education now remains critical for the development of humans and provides the high-level skills necessary for the labour market.

Torgbuiga Wenya III asked for unity among the Anlo Chiefs and the people in order to have the needed development rightly deserved by the land.

He urged everyone to forget about any kind of conflict and unnecessary issues that do not bring development to the land and rather focus on the goal to have a better Anlo.

Torgbuiga Wenya III pledged to work in collaboration with the Awormefia of the Anlo State and other Chiefs to achieve the needed development for the area.

The Chief however called on all the traditional rulers in the Anlo State to come together to maintain the unity and cohesion of the area to make it a better place for all.

‘We need to avoid unnecessary disputes since there is strength in unity towards one goal,” he stressed.

He noted that it is time for Anlo to move to greater heights in developing the land by uniting and working with the main focus of achieving the desired goals.

Torgbuiga Wenya III stated further that the time has come for Anlo State to put forward proposals and activities that will propel it to greater heights “and l need not fail you.”

Mamagah Abui Buiekpor II also pledged to make sure that every child in the Anlo State is well educated with the focus on the girl child.

“In a society where things are changing speedily, women are needed to help make things even better and so I am here to empower my dear women and girls and make sure every child goes to school,” Mamagah Abui Buiekpor said.

Torgbui Akwaah III, Dutor of Alakple noted that Togbiga Wenya III is a great man of the land from the rightful clan, chosen by the rightful kingmakers of the Loafe Clan.

The two went through confinement for eight days during which the kingmakers of Loafe Clan performed the necessary traditional rites and swore an oath of allegiance to be truthful and protect the land at all times.

The ceremony was under the supervision of the Paramount Chief of Klukor, Torgbui Addo and was attended by very high profile penalties from the media, showbiz and movie industry, traditional leaders families of the newly outdoored King and Queen and a host of indigenes of the land.