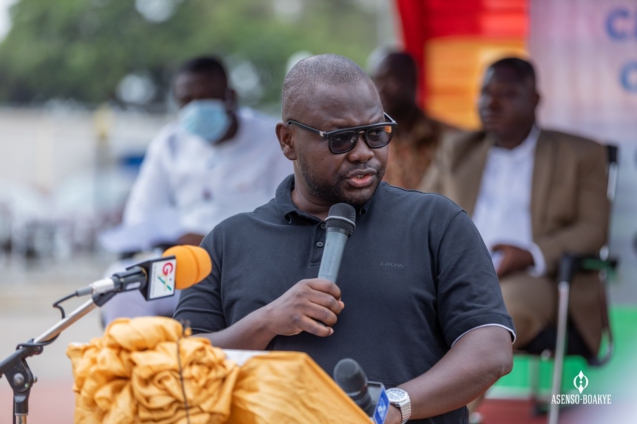 Housing Minister Francis Asenso-Boakye has called on Ghanaians to change their attitudes regarding how waste is dumped in drainages meant to enhance stormwater flow.

He observed that this will go a long way to complement government interventions against the perennial flooding in the capital and other parts of the country.

The MInister said this at the launch of a Social Behaviour Change Communication (SBCC) for the Greater Accra Resilience and Integrated Development Project (GARID) on Wednesday, April 13 in Accra.

The Minister said for the country to find a lasting solution to the menace of flooding, government’s efforts must be complemented by appropriate waste disposal behaviours on the part of people and the commitment of various Municipal, Metropolitan and District Assemblies (MMDAs) to enforce sanitation laws and strictly apply the necessary punitive measures without fear or favour.

The SBCC Campaign forms part of a holistic approach by government, through the GARID Project, to manage flood and solid waste in flood-prone informal settlements within the Odaw Basin.

Francis Asenso-Boakye also recounted the huge investments made by the Akufo-Addo administration under the National Flood Control and Priority Drainage Programme, with financial commitment amounting to ¢450 million over the last four years.

These interventions, namely, the construction, excavation, rechannelling and maintenance of storm drains, have reduced perennial devastating floods across the country in recent years.

The GARID Project, which aims to improve flood risk and solid waste management in Accra, Asenso Boakye, disclosed that the government will further commence a performance-based dredging activity of the Odaw Basin and its tributaries in June as part of continued efforts to address flooding challenges in Accra.

The Works and Housing Minister, however, observed that the investments made by government are being undermined by inappropriate behaviour of residents of some communities in Accra, particularly communities along the Odaw channel who are engaged in buildings in waterways, indiscriminate dumping of solid waste, which finds its way into drains.

He worried that implementing the GARID Project’s interventions and all other government flood mitigation measures will not succeed if people’s inappropriate behaviour and underlying attitudes did not change.

The Greater Accra Resilient and Integrated Development (GARID) Project is a government of Ghana project to address flooding in the Odaw Basin of the Greater Accra Region and improve drainage, solid waste management and provision of services and infrastructure in priority flood-prone informal settlements within the basin.

The project is being implemented in 17 Metropolitan and Municipal Assemblies in Accra by the Ministries of Works and Housing, Sanitation and Water Resources and Local Government, Decentralisation and Rural Development with support from the Project Coordinating Unit.