Persons with disability cautioned against sale of support packages 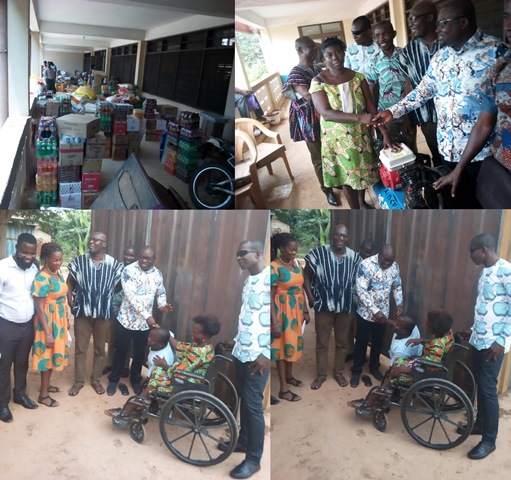 The Ketu South Municipal Assembly has presented life enhancement start-up kits and cash, worth GH¢154,750 to 89 Persons With Disability (PWDs), funded with three per cent of the Assembly’s Common Fund on Friday at Denu.

Mr Elliot Agbenorwu, Municipality Chief Executive (MCE), cautioned against the practice of PWDs reselling such livelihood support items meant for their use.

Mr Agbenorwu was emphatic there were rules and regulations regarding the scheme, warning anyone found contrarily selling the items would be dealt with.

“As you can see, we have this time labeled most of the items in the name of the Assembly in order to identify anyone resold for the appropriate action against both the buyer and the PWD involved,” he said.

Others are gallons of vegetable oil and cartons of biscuits and Milo.

The cash component, given in cheques totalling GH¢78,450.00, was for beneficiaries to acquire accessories to start their choice businesses, while the students met their academic needs.

Mr Agbenorwu said the improvement of the Disability Fund from two percent to three percent since 2018 was Government’s deliberate plan of giving the PWDs fair share of the national cake to enhance their social status.

He said they also changed the policy by presenting them with the start-up kits and cash for them to establish long term businesses, instead of all cash which was quickly blown off.

Mr. Agbenorwu told the group that disability was not inability, and therefore encouraged them to work hard to make it in line with Government’s eagerness at building their capabilities to empower them.

He said Government was on target at developing the country as was in its 2016 campaign promise.

The MCE urged the beneficiaries to exercise their civic rights and responsibilities, including registering as voters and participating in all public elections and to closely relate with Government or national programmes.

Mr Gideon Nyamedi, Municipal Social Welfare Officer, said the next batch of beneficiaries would be considered in a short time on arrival of next tranche of funds.

Mr Robert Sosu and Miss Delali Akorli, a Tailor and a Seamstress respectively, who received one container for a joint tailoring workshop, commended the Government for the support and promised to justify the support.

DISCLAIMER: The Views, Comments, Opinions, Contributions and Statements made by Readers and Contributors on this platform do not necessarily represent the views or policy of Multimedia Group Limited.
Tags:
Disability
Ketu South Municipality
PWDs