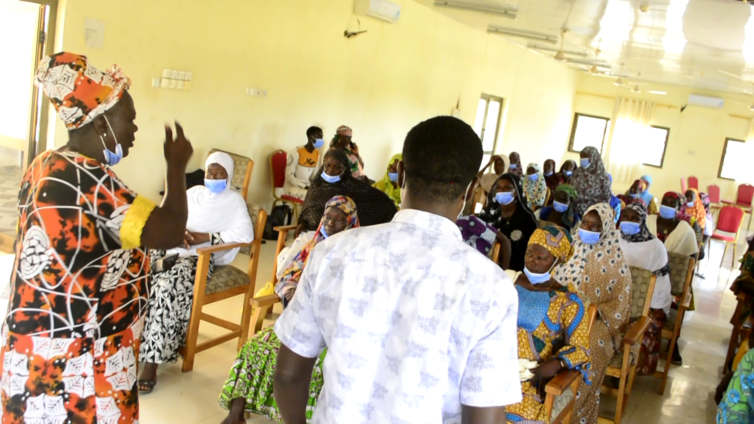 Women farmers play a critical role in the Ghanaian agriculture sector as they produce up to 60% of food consumed in our homes.

Despite this contribution to the food security of the country, some traditional norms and practices tend to hinder the progress of women in agriculture.

In some parts of the Upper East Region, for instance, customs bar women from owning lands within their traditional family settings.

It is then shared among the man’s brothers or his nephews. This implies that his wife and daughters are denied the opportunity to engage in farming activities, even if they have the desire to do so.

According to Mamata Issifu, a woman sorghum farmer from Yariga Number 2 in the Pusiga District of the Upper East Region, she has had to face discrimination in her attempts to purchase fertilizer, hire tractor services or even access credit facilities for her farming activities because the people she needed the services from preferred to serve her male counterparts first.

“During the farming season, it is difficult for us – the women, to get tractors to plough. The men block all the tractors. If the men do not finish ploughing, they [the tractor operators] will not give it to the women”, she said.

Upper East Regional Secretary for the Women in Agriculture Platform [WAP], Gilberta Akuka says these biases are mainly due to the traditional belief that women farmers “cannot be compared” to their male counterparts.

“They think that the woman farmer cannot do much as compared to a man. So, they will have to work on the men’s farms first before they come to us. This makes us [the women farmers] late and our yields don’t come out very well because of the late sowing”, she said.

Madam Akuka also revealed that women farmers have often been bullied into forfeiting their quota of the government subsidised ‘Planting for Food and Jobs” fertilizer.

“It is difficult for women to get fertilizer; especially this planting for food and jobs fertilizer. When it comes and you go to queue [for it], they [the men] push you away because they know that you are not strong enough to fight or to struggle with them for the fertilizer”, she said.

According to the Peasant Farmers Association of Ghana [PFAG], such customs are detrimental to the growth of agriculture and the economic empowerment of women farmers.

To help solve the problem PFAG, through a project known as the System Innovation for Women’s Economic Empowerment [SIWEE] has empowered 151 women in the Pusiga District of the Upper East Region to lead the advocacy towards the elimination of cultural practices that hinder the growth of women in the agriculture sector.

The two–day program was funded by Oxfam Ghana.

A capacity-building workshop was organised for the women and a series of dialogues will be held with traditional leaders to help change some of the traditional norms.

As part of the capacity building, the women were trained in leadership skills that would equip them to be able to engage their community leaders and traditional authorities to discuss matters affecting women.

The Peasant Farmers Association of Ghana also intends to facilitate an engagement between the women and the Pusiga District Chief Executive and the District Director of Agriculture to discuss district-level policies that should be beneficial to the women.

National President of PFAG, Abdul-Rahman Mohammed said it was hoped that the training, will in the long term, help to remove the customary barriers that hinder the progress of women in the agriculture sector.

“The women themselves have said that this an eye-opener because it has helped them to know how to be able to engage the district assembly, which [hitherto] they were unable to do”, Mohammed said.

He added that the SIWEE project will go on for six months and they hoped that with more funding support, they will able to scale it up to reach more women.

Some of the women who took part in the workshop said they were emboldened by what they learned.

“We feel empowered now. We can go to our DCE, our MP or our chief and tell them our problems. So, if I go back [to my community], we have a women’s group and I am the secretary. I will call them together and share what I have learned here with them”, said Rukiya Moro, a woman farmer from the Tesnatinga community.

DISCLAIMER: The Views, Comments, Opinions, Contributions and Statements made by Readers and Contributors on this platform do not necessarily represent the views or policy of Multimedia Group Limited.
Tags:
Peasant Farmers Association of Ghana
Pusiga
SIWEE Project