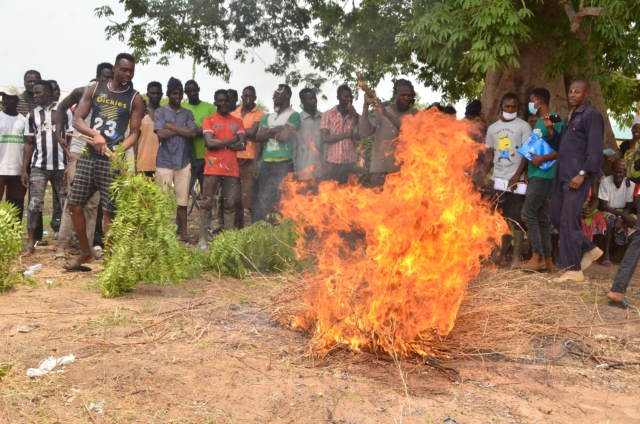 Bush fires have been identified as a major risk to the livelihoods of peasant farmers in the savannah areas of Ghana.

Between the year 2019 and now, about 3,000 hectors of farm produce have been lost to bush fires, and all at the time when the produce was due for harvest.

The result of this was severe post-harvest losses to the farmers.

To help mitigate the problem, the Peasant Farmers Association of Ghana has trained farmers in the Builsa South District of the Upper East Region, in the prevention and control of fires on their farms.

Dozens of farmers at Fumbisi lost their rice harvests in 2019 and 2021 due to bush fires.

The Peasant Farmers Association of Ghana, [PFAG] estimates that about 3, 000 hectares of farm produce including rice, maize and soya beans belonging to some of their members across the country, were lost to bush fires between 2019 and 2021.

Of the figure above, about 100 hectares belonged to farmers in the Builsa South district, according to the District’s Crops Officer, Abdulai Amadu who also says rice is normally harvested around the month of November when the dry season is just setting in.

Therefore, coupled with the onset of the harmattan, the spread of bush fires to the farms becomes rampant in the Builsa South District.

According to the Operational Officer at the Builsa South District Station of the Ghana National Fire Service, Abdul Karim, rice is highly combustible because when ready for harvest, the rice plants dry up and therefore burn faster.

“When a rice farm is burning, it is like a fuel [has been added]. It is not easy to fight rice farm fires because when a seed of rice catches fire, there is [normally] a spark and it goes with the wind. So, the fire will be spreading very fast”, he said.

Abdul Karim indicated that during the dry season, they get a lot of calls at the fire station about fires on rice farms.

“Sometimes, we are able to get there and bring the fire under control and salvage the farm but at other times, due to communication challenges, some people lose their farms [to the fire outbreaks] before we get there” he said.

Abdul Karim acknowledged that it was imperative for farmers to know basic tips about bush fire control through trainings such as this one which was organized by the Peasant Farmers Association of Ghana.

About 100 farmers took part in the training which was facilitated by officers of the Builsa South District Station of the Ghana National Fire Service (GNFS) at Fumbisi.

The farmers were trained in how to create fire belts on their farms, how to use Fire Beaters and how to extinguish fires by using cocoa sacks.

Fire belts prevent small fires created by farmers during the tilling of their lands from spreading to other parts of the farm. This is done by clearing all the grass or plants surrounding the small fire. The cleared area forms a ring around the fire, thereby preventing the fire from spreading.

Assistant Station Officer at the Builsa South District Station of the Ghana National Fire Service, Eric Ingman who trained the farmers said if farmers were able to quickly create fire belts any time a bush fire spreads to parts of their farms, they would be able to salvage the rest of the farms or at least, delay the spread of the fires till the Fire Service arrive at the scene.

The farmers were advised to make use of the Fire Beater in instances where the fire is spreading very fast and there is not enough time to create a fire belt.

The Fire Beater is a simple tool made of a long wooden handle and large strips of leather at one end of it. It is used to put out fires by simply beating the spreading flames.

“We take out the oxygen [in the fire] by using the Fire Beaters. That is called starvation [in firefighting]”, Ingman said.

He said in the absence of the Fire Beater, tree branches with the leaves on them can be used.

The last aspect of the bush fire prevention training looked at how the farmers could put out fires by using cocoa sacks.

This is done by soaking the sack in water and throwing it over the fire.

Eric Ingman said this method is recommended for instances of domestic fires.

He said in the absence of a cocoa sack, a thick blanket may be used.

The farmers who took part in the training were excited about what they learned.

One of them, Richard Akanlu said he believed he had learned new skills from the training.

“Some years ago, they educated us about bush fires so I believe with this [training], we can cultivate our farms without causing any fire outbreaks”, he said.

The Peasant Farmers Association of Ghana (PFAG) organized the training in partnership with the Ghana Federation of Forest and Farm Producers with funding from the Forest and Farm Facility of the Food and Agriculture Organization [FAO].

Head of Programs and Advocacy for the Peasant Farmers Association of Ghana, Dr. Charles Nyaaba said even though government has decided to invest in the area of rice production in the country, one of the major factors which could discourage investors from coming into that industry is the risk of fire outbreaks.

“There are years in which farmers produced well, the rice yielded well and when it got to harvesting, they lost everything to bush fires. This can discourage any investor who wants to come in”, Dr. Nyaaba said while revealing that he became a victim of these fires last year after he lost 60 out of his 100 – acre rice farm to a bush fire.

Dr. Charles Nyaaba also revealed that the fires are often caused by either the farmers themselves while trying to use fire to do some work on their farms or community members who often burn bushes in order to hunt for bush meat.

He added that myths also contribute to bush fires because in some communities, people believe that ghosts hide in the bushes to haunt them and therefore, they burn the bushes with the belief that it would scare away these ghosts.

“So, we organized this training to educate the farmers and also get bush fire volunteers who will continue to work with the fire service to prevent these bush fires” he said.

Dr. Charles Nyaaba also revealed that the training will be replicated in other rice growing areas including Yagaba in the North – East Region.

DISCLAIMER: The Views, Comments, Opinions, Contributions and Statements made by Readers and Contributors on this platform do not necessarily represent the views or policy of Multimedia Group Limited.
Tags:
Builsa South District
Bush Fires
Fumbisi
Peasant Farmers Association of Ghana