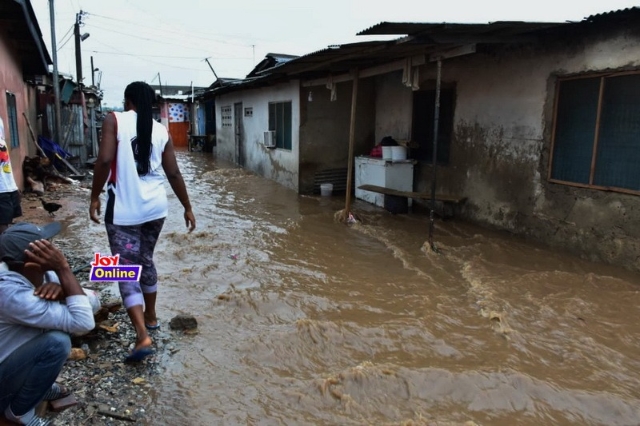 Floods continue to wreak havoc in parts of the capital following one hour of rain on Monday.

For instance, residents at Asylum Down, Kaneshie and parts of the Accra International Trade Fair all in Accra spent hours scooping out water from the homes, while the Okponglo area on the Madina-Accra highway, which is notorious for flooding, was not left out.

Meanwhile, unconfirmed reports indicate that two persons were killed during the rains.

NADMO officials have been unavailable to confirm the deaths, but President Addo Akufo-Addo is expected to tour some flood-prone areas later this morning.

Ahead of that, Dredge Masters, the contractors carrying out dredging works in the Odaw River, said it has cleared out lots of silt from the 7.5 km stretch drain to prevent spillovers during the rains.

The video below shows the flooding situation at KIA’s Terminal 3 on Monday.

Also published below are some random shots from flood locations in Accra.