Physical challenge must be avoided during biometric voter registration - MyJoyOnline.com

Physical challenge must be avoided during biometric voter registration 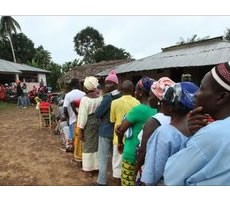 Madam Laurentia Kpatakpa, the Volta Regional Director of the Electoral Commission, has said physically accosting persons perceived as unqualified to register in the impending biometric voter registration exercise must be avoided.

She said this style of objection would be unlawful and disruptive of the fluidity of the registration exercise. Persons who might object to the registration of certain persons must do so by filling challenge forms.

Madam Kpatakpa was speaking at a regional dialogue session on the biometric voter registration exercise in Ho.

She said television advertisements in which people were seen being physically pulled from queues should therefore be looked at again.

The dialogue session was attended by representatives of political parties, National Commission for Civic Education and the media under the theme, “Enhancing the credibility of the 2012 Ghana election.”

She said the voter identity cards of persons against whom objections would be raised would be withheld until the complaints would be looked into by a complaints committee.

She said those who might object to the registration of others must be prepared to testify with proven evidence.

She said the mechanisms of the biometric registration have in-built security measures to check manipulation and abuse which should be further consolidated by the preparedness of all stakeholders to guard the processes.

Participants were taken through practical aspects of the system and processes to test its credibility.

In a demonstration, a representative of a political party who attempted to register twice under different names was rejected as he got to the final stage of the process.