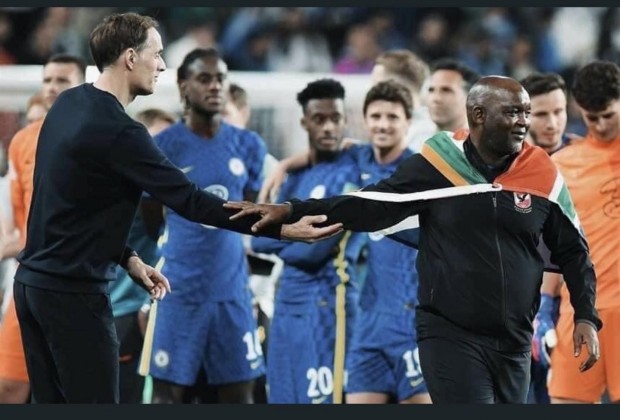 Pitso Mosimane, who is a big fan of Pep Guardiola, has eulogised the Manchester City coach referring to him as a legend but also believes Thomas Tuchel could surpass the Spaniard.

The Al Ahly coach recently won back-to-back bronze medals at the Club World Cup and has been heralded as one of the best African coaches in recent times.

For even the best in the game, they modeled the game after their predecessors and Mosimane is no different. The former Mamelodi Sundowns coach looks up to Guardiola and regards him as the best coach in the world.

“Pep is a top coach and a legend. For me, he is the number 1 coach in the world at the moment. There are many other great coaches,” the 57-year-old told Joy Sports.

After finishing third in the Club World Cup, the five-time DStv Premiership champion shared a moment with Chelsea coach Tuchel. Mosimane says he was humbled by Tuchel after the German approached him.

“I have respect for Thomas Tuchel, he humbled me in the Club World Cup when he spoke to me. I just feel Pep has won a lot more than Tuchel but with Tuchel it is a matter of time. He [Tuchel] is young and probably could pass Pep. But Pep also keeps winning so it won’t be easy”

🇪🇬 @AlAhly receive their 🥉medals after finishing third at the #ClubWC.

Mosimane is looking to become the first coach to three-peat the CAF Champions League after winning it two years in a row with Al Ahly.

DISCLAIMER: The Views, Comments, Opinions, Contributions and Statements made by Readers and Contributors on this platform do not necessarily represent the views or policy of Multimedia Group Limited.
Tags:
Al Ahly
Pep Guardiola
Pitso Mosimane
Thomas Tuchel