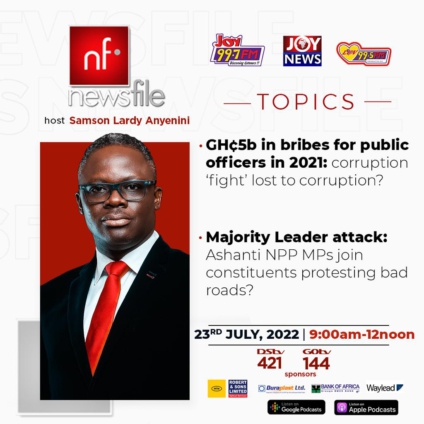 Today’s edition of Newsfile on the JoyNews channel is discussing the payment of nearly ¢5 billion as bribes to public officers last year.

The 2021 Ghana Integrity of Public Services Survey (GIPSS) by the Ghana Statistical Services (GSS) and the Commission on Hunan Rights and Administrative Justice (CHRAJ) found that 26.7% public sector officials were engaged in bribery acts.

In the private sector, 9.1% of officials were involved in bribery and corruption.

The survey revealed that, on the average, there is no difference in the prevalence of bribery in rural and urban areas of Ghana. There are, however, sizeable variations across the 16 regions of the country.

The Ghana Police Service recorded 53.2% corrupt cases, followed by the Ghana Immigration Service and the Ghana Revenue Authority with 37.4% and 33.6%, respectively.

Host of Newsfile, Samson Lardy Anyenini, and his guests will also discuss the attack on the Majority Leader, Osei Kyei-Mensah-Bonsu, by some Suame residents.

The artisans were irate over delays by the government in fixing the deplorable Suame Roundabout-Maakro stretch of the main Kumasi-Techiman road, which they say is not only hampering businesses but also threatening lives.