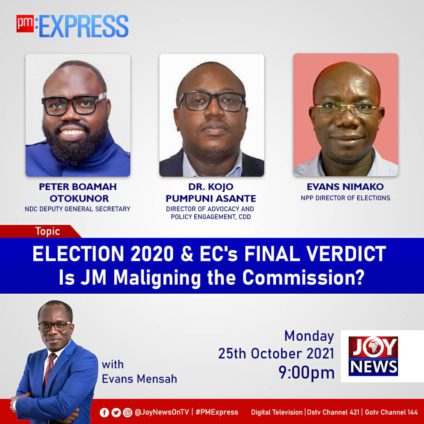 The Electoral Commission (EC) has described the electoral processes of the 2020 General elections as transparent.

This comes amidst concerns from former President John Mahama and the National Democratic Congress that the results from the election were fictitious and were influenced by the military.

Addressing the press on Monday over such claims, Deputy EC Chair, Dr Bossman Asare denied the allegations, insisting that the military had no influence in the declaration of the results.

He therefore urged citizens to regard such statements as untrue and challenged the former President to provide proof to his claims that the electoral body thumb-printed one million ballots.

But Director of Elections for the National Democratic Congress (NDC), Elvis Afriyie Ankrah has noted that claims of one million thumb-printed ballots were never uttered by the 2020 NDC flagbearer.

Tonight on JoyNews, host of PM Express, Evans Mensah and his panelists discussed the position of the EC and whether former President Mahama is on a quest to malign the Commission.