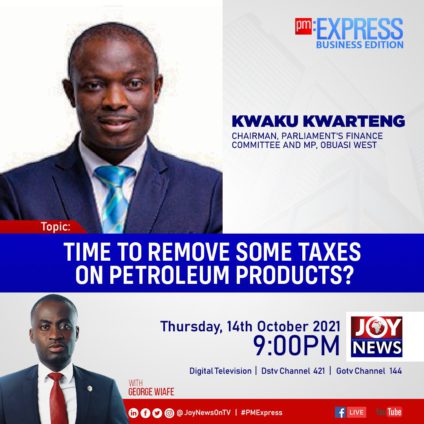 The Ghana Private Road Transport Union (GPRTU) is requesting that government scraps about six taxes and levies in the petroleum sector amidst concerns of a rise in fuel prices.

This comes after President Akufo-Addo granted approval to zero the Price Stabilisation and Recovery Levies on petrol, diesel, and LPG for a period of two months to cushion players in the energy sector from the impact the consistent rise in petroleum products will have.

But according to the Union, the President’s directive is simply not enough to cushion commercial drivers from the difficulties they are facing as a result of increased fuel prices.

Meanwhile, the Oil Marketing Companies (OMCs) and the National Petroleum Authority (NPA) have indicated that prices of fuel will be adjusted upwards by at least 7 per cent at the pumps come Saturday, October 16.

Tonight on PM Express Business Edition, host, George Wiafe engaged with Chairman of Parliament’s Finance Committee, Kwaku Kwarteng to find out if the current circumstance calls for the removal of some taxes on petroleum products as suggested.