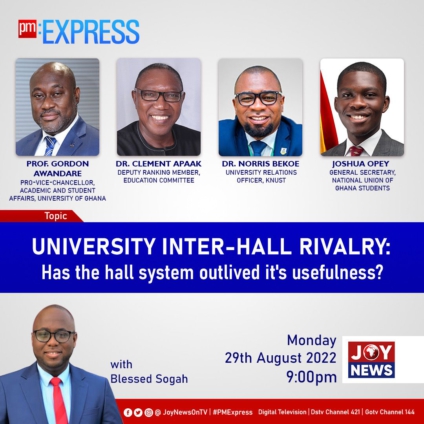 On Friday, August 5, 2022 an inter-hall fight ensued between the residents of the Commonwealth and John Mensah Sarbah halls of the University of Ghana which resulted in injuries and damage to properties.

The University’s Management condemned the act. Later, the Hall Master and Senior Tutor of Commonwealth Hall were suspended for their inaction which caused the clash between residents.

In the same month, rampaging students on the campus of the KNUST also vandalized cars and other property in a clash between students of University Hall ‘Katanga’ and Unity Hall ‘Continental’.

A number of cars parked in front of Conti hall were damaged by the feuding students. The development has resulted in the suspension of Hall Week and SRC Week celebrations on campus indefinitely.

According to the Council, any student who participates in the organisation of what is termed as ‘morale’ and/or ‘procession’ shall be summarily dismissed.

This brought us to the conversation on Tonight’s Edition of PM Express on the topic “Has the hall system outlived its usefulness?”

The guests for the discussion were; Pro Vice-Chancellor, Academic and Student Affairs of the University of Ghana, Prof Gordon Awandare, Deputy Ranking Member on the Education Committee, Dr Clement Apaak, University of Relations Officer at KNUST, Dr Norris Bekoe and General Secretary of the National Union of Ghana Students, Joshua Opey.

DISCLAIMER: The Views, Comments, Opinions, Contributions and Statements made by Readers and Contributors on this platform do not necessarily represent the views or policy of Multimedia Group Limited.
Tags:
Inter-hall rivalry
PM Express