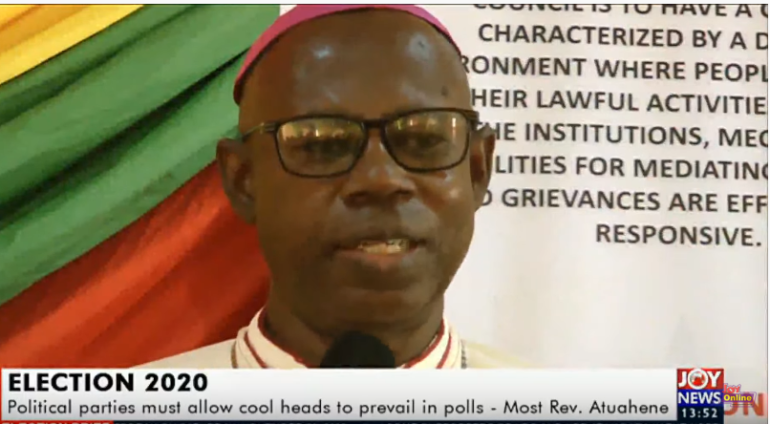 Chairman of the Ahafo Region Peace Council, Most Reverend Peter Kwaku Atuahene has called on political parties to ensure peace reigns as the election beckons.

He said this would help a great deal as the Council works with Security agencies to safeguard peace in the Region even after the December 7 general election.

His observation comes on the back of some 80 identified flashpoints prone to electoral disturbances in the Region, as observed by the Ghana Police Service, in addition to its records of political violence over the last few years.

“For us, it’s just a way of talking and trying to relate to making sure that they will let cool heads prevail so that the people that they want to come and rule over are intact when they come into power. We’d keep talking, and we hope that they listen to us,” he said.

The Catholic Bishop of Goaso observed in an interview with Joy News after the inauguration of the Ahafo Regional Peace Council in Goaso over the weekend that some people are emotionally attached to political parties and are ready to cause chaos to that effect.

According to him, the youth’s involvement in such violent activities can be attributed to survival instincts, as they do so to help their preferred choices to secure power, in order to assist them by way of employment.

On their part, the Ghana Police Service added that it has worked hard to ensure public safety, and will not hesitate to deal with individuals or groups with intentions of jeopardising peace in the Ahafo Region.

Deputy Regional Police Commander, ASP Andrews Boadu Ekumah noted the Service’s commitment to ensuring sanity before, during and after the December 7 election.

“We are prepared, and we’d make sure that this year’s election will be conducted very peacefully,” he said.