Politics has taught me lessons not regrets - George Andah - MyJoyOnline.com

Politics has taught me lessons not regrets – George Andah 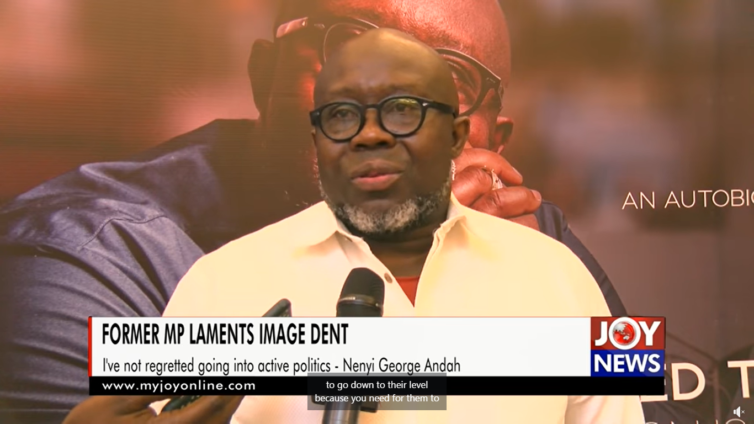 A former Deputy Communications Minister, George Andah, says he has not regretted transitioning from the corporate world into active partisan politics.

According to him, the experience has given him the opportunity to grow his career although he is yet to master the art of convincing people to believe in his political ideology.

He noted that he has learned lessons from his experiences in politics to further guide his life exploits.

The former Awutu Senya West MP, however, lamented the consequences of image dent associated with being actively involved in Ghanaian politics.

Mr Andah made these comments in an interview with JoyNews after his autobiography book launch titled “Determined to do more, the Mission is possible.”

He then went on to establish his own company called, RUDDER Solutions, a Ghana-based market-development management consultancy service.

He joined active politics in 2016 and won the seat to represent the NPP but lost the 2020 general elections to the NDC.

The over 200-paged book was launched at the Labadi Beach Hotel on Tuesday.

It provides detailed accounts of his childhood, teenage and adulthood, guided by his can-do attitude, captivating and exciting life stories.

The autobiography is an uplifting story of struggles, successes, personal tragedy and an unending desire not to give up.

It was launched by Barimah Kwaku Dua. The Minister for Information, Kojo Oppong Nkrumah and other dignitaries were in attendance.