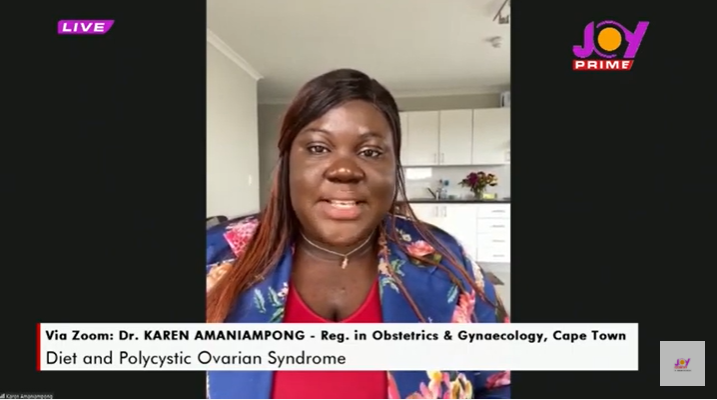 A Gynaecologist with the Obstetric and Gynaecology Department in Cape Town, South Africa, Dr. Karen Amaniampong says Polycystic Ovarian Syndrome (PCOS) puts most women into a state of depression.

Dr. Amaniampong explained that excess androgen in women with PCOS has a physiological effect on the female anatomy. She said other symptoms such as; irregular menstruation, issues of getting pregnant, obese amongst others, put women into a mood of psychological worry, which leads to depression.

“PCOS put women at risk of developing psychological problems and depression due to its persistent effects and the worry associated with women having irregular or scanty menstruation”, she stated.

PCOS is a hormonal disorder causing enlarged ovaries with small cysts on the outer edges, common among women of reproductive age.

Speaking on Joy Prime‘s Good Living on Tuesday, She noted that it affects one’s mood for a long time if not detected at the early stage, this as well as changes in the female reproductive system caused by excess androgen puts these women into a state of frequent worry which is a risk factor of depression.

She stated that all women within the reproductive stage can be affected, hence the need for women to seek medical check-up when they experience the symptom mentioned earlier because it ranges from mild to severe making it difficult to identify at the mild stage.

Women with PCOS may have irregular menstrual periods or excess male hormone (androgen) levels. The ovaries may develop numerous small collections of fluid (follicles) and fail to regularly release eggs.

The cause of PCOS may involve a combination of genetic and environmental factors with symptoms including, menstrual irregularity, excess hair growth, acne, and obesity.

PCOS is a hormonal disorder causing enlarged ovaries with small cysts on the outer edges, common among women of reproductive age.