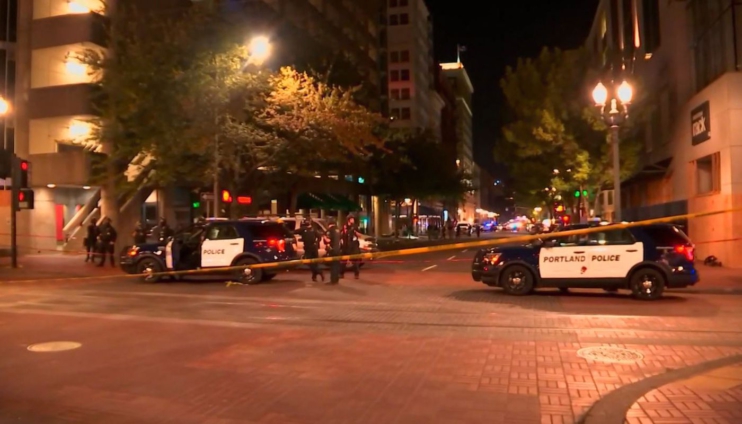 US President Donald Trump and his Democratic rival Joe Biden have clashed over the violence that has erupted at protests in Portland, Oregon.

Mr Trump blamed the Democrat mayor of Portland, Ted Wheeler, for allowing the “death and destruction of his city”.

But Mr Biden said the president was “recklessly encouraging violence”.

A man was shot dead in Portland on Saturday as elsewhere in the city a pro-Trump rally clashed with Black Lives Matter protesters.

Portland has become a flashpoint for demonstrations against police brutality and racism since the police killing of African-American George Floyd in Minneapolis on 25 May triggered a wave of national and international outrage.

‘This is Trump’s America’

In a series of tweets on Sunday, Mr Trump said that “Portland will never recover with a fool for a mayor”, and suggested sending federal forces to the city.

He also accused Mr Biden of being “unwilling to lead”.

..The people of Portland, like all other cities & parts of our great Country, want Law & Order. The Radical Left Democrat Mayors, like the dummy running Portland, or the guy right now in his basement unwilling to lead or even speak out against crime, will never be able to do it!

In a statement, Mr Biden said: “[Trump] may believe tweeting about law and order makes him strong – but his failure to call on his supporters to stop seeking conflict shows just how weak he is.”

Law and order is a major theme of President Trump’s bid for re-election, painting the Democrats and their candidate Joe Biden as soft on crime.

Earlier, acting US Homeland Security Secretary Chad Wolf said Democrats officials in Portland had allowed “lawlessness and chaos” to develop, saying “all options” were on the table to resolve the situation.

For their part Democrats have responded by saying the violence is happening under Mr Trump’s presidency, and accuse the US leader of worsening the situation with his rhetoric.

Mayor Wheeler said it was Trump who had “created the hate and the division”.

“I’d appreciate it if the president would support us or stay the hell out of the way,” he said.

Police are investigating the shooting in the city, which has seen months of demonstrations.

“Portland Police officers heard sounds of gunfire from the area of Southeast 3rd Avenue and Southwest Alder Street. They responded and located a victim with a gunshot wound to the chest,” Portland police said in a statement.

Oregon Live reported that “camouflage gear” with “thin blue line patches” was seen next to the body – a common sign of support for the police.

Another image shows police trying to restrain a man who was apparently with the person who was shot.

Police have not identified the dead man or specified whether the shooting was directly linked to the clashes which broke out in a downtown area.

Without naming him the founder of the far-right group Patriot Prayer said the victim was “a good friend and a supporter”, the Associated Press news agency reports.

The shooting came amid fights between the Trump supporters and BLM protesters in the city centre.

Tension rose after a convoy of some 600 vehicles flying flags and carrying an estimated 1,000 Trump backers gathered at a mall in Clackamas county on the outskirts before entering Portland’s downtown.

Ten people were arrested over the clashes, police said.

The continuing violence on US streets brings into focus the evolving tone of Donald Trump’s election campaign – criticising cities run by Democrats, where much of the trouble has occurred, and framing himself as the law and order president.

Portland has been the epicentre of Black Lives Matter protests ever since the police killing of George Floyd, but the convergence of pro-Trump supporters, in large numbers, with anti-racism demonstrators marks a volatile escalation.

Tweeting “LAW & ORDER!!!” hours after the latest disturbances, Mr Trump makes it clear that the issue will dominate his appeal to the American people for a second term in office.

This could be a pivotal week. On Tuesday the president will head to Kenosha, in the political swing state of Wisconsin, where violent protests followed the police shooting of Jacob Blake. The stated reason is for Mr Trump to meet local police and “survey damage from recent riots”.

Many Americans will be watching to see if the president also reaches out to Mr Blake and his family and for any expressions of empathy for those who’re angry about police brutality.

DISCLAIMER: The Views, Comments, Opinions, Contributions and Statements made by Readers and Contributors on this platform do not necessarily represent the views or policy of Multimedia Group Limited.
Tags:
Biden
Portland protests
Trump