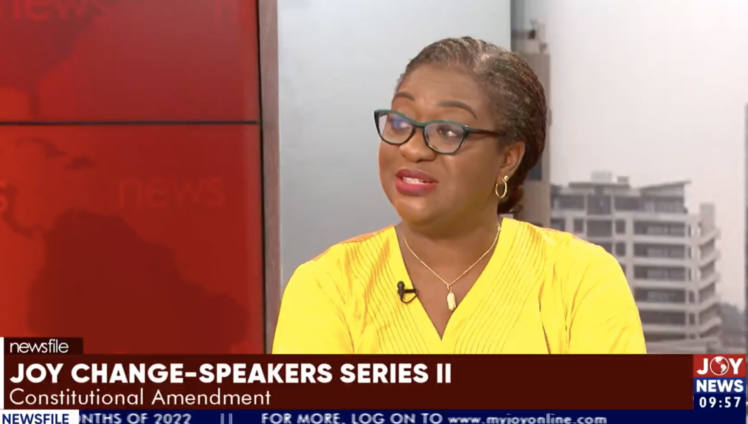 The 2020 Presidential Candidate for the Progressive People’s Party (PPP) has added her voice to the undying calls for constitutional reforms.

Madam Brigitte Dzogbenuku said the constitution in its current form only favours a few political elites at the expense of all Ghanaians.

According to her, the 30-year democratic rule has rather been against the very fiber of making Ghanaians better off.

She spoke on Joy Change-Speakers Series II on Newsfile on Saturday, May 21.

Madam Brigitte Dzogbenuku mentioned massive youth unemployment amongst others as the basis for her assertion.

Assertions, she said, are verifiable by all Ghanaians and must be addressed immediately to avert any unforeseen circumstances.

“Our 30-year democratic experience has rather registered massive youth unemployment, excessive and unfettered executive powers, unbridled corruption, a compromised Parliament, waste of Ghana’s resources, nepotism, mediocrity mismanagement of the economy, and the constant failure of leadership,” she said on JoyNews.

“In fact, the current constitution has rather created a situation where winning political parties have treated the republic as a colony to be conquered, and its resources are taken for the welfare of the few privileged members of the political elites of the party in power depriving the significant majority of Ghanaians of the dividends of a welfare,” she told Lardy Anyenini.

Madam Brigitte Dzogbenuku has thus proposed five key fundamental amendments that should be made to the 1992 Constitution.

She maintained that even though, these would not address all the issues with the Constitution, it will go a long way to helping shape the same for the betterment of the ordinary Ghanaian.

Below are her proposals for amendment.