Prempeh College's interactive screen was locked through no fault of theirs during NSMQ finale - Primetime Limited reveals - MyJoyOnline.com 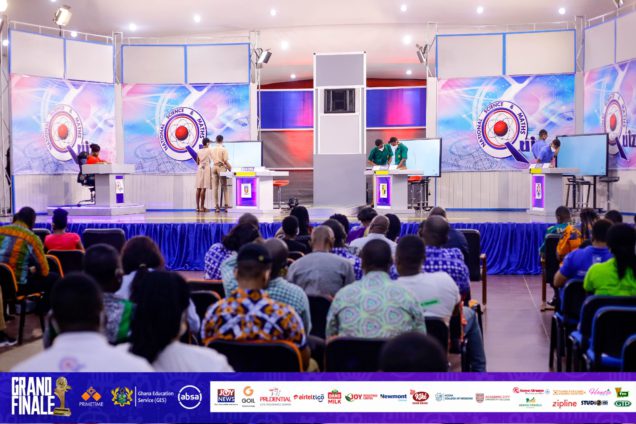 Finalists face Problem of the Day in Round Three

Organisers of the National Science and Maths Quiz (NSMQ), Primetime Limited have cleared the air about an incident that landed five-time champions, Prempeh College an additional 15 seconds in Round Three during this year’s grand finale.

On November 26, Presbyterian Boys Senior High School (Presec-Legon), Prempeh College and Keta SHTS battled fiercely in Kumasi for the coveted trophy and the bragging rights as the 2021 NSMQ champions.

When all was said and done, Prempeh College emerged victorious to “Glory5” God.

Round Three that involved the Problem of the Day, however, stood out from the other four rounds. This is because the interactive screen used by Prempeh College failed to function at some point in time.

As a result, the ‘Amanfuo’ were provided with additional 15 seconds to complete their solution. After this, the school won all 10 points allocated.

Supporters of Presec-Legon on social media were not pleased with the turnout of events, claiming that Prempeh was unfairly given additional time; one of the reasons for Presec’s defeat.

In a press statement addressing the concerns, Primetime Limited have indicated that no foul play occurred during the much-anticipated finale.

According to the organisers, after an assessment of the situation, it was revealed that Prempeh College’s screen got locked about 20 seconds to the end of the round.

This anomaly, Primetime Limited insists was “through no fault of the team of Prempeh College;” thus, “it was recommended that they be given 15 seconds to complete their work.”

It also noted that the allocation was made since Presec-Legon and Ketasco continued their work and enjoyed the full four minutes allocated for the question.

For Primetime Limited, Prempeh College’s victory cannot be questioned or undervalued because as of the time their screen locked, “they were ahead of the other two schools, in terms of the solution they had presented on their screen.”

The organisers cited a similar incident at this year’s preliminary stage contests in the Volta-Oti Zone on November 5, where Kpedze SHS was awarded 30 extra seconds during a contest against Mawuli School and Awudome SHS.

Kpedze SHS’ whiteboard was not stable during the presentation of their solution, hence the decision to provide the school extra time.

“The granting of these extra minutes, in both cases, was in fairness to teams that had suffered the mishap of a faulty set-up that had prevented them from working freely, like their competitors, and not an attempt to give them undue advantage over their competitors,” Primetime Limited emphasised.