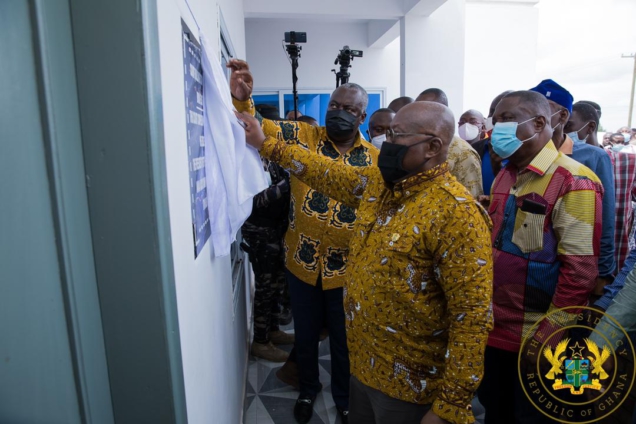 President Nana Akufo-Addo on Sunday at the commencement of his two-day working visit to the Bono East Region commissioned a fully furnished dual Court Complex building in Kintampo.

The complex, which is a dual Court complex, will house the Municipal Court and an additional Court to be determined by the Chief Justice.

The construction of this complex forms part of deliberate measures being put in place by the Akufo-Addo Government to ensure ease of access to law courts, thereby advance the rule of law in the country.

It will be recalled that, in his Message on the State of the Nation, on 9th March 2021, President Akufo-Addo revealed that Government, through the Ministry of Local Government and the District Assembly Common Fund, had commenced, in an unprecedented initiative, the construction of ninety (90) courts with accompanying accommodation for judges across the country, to help address the problem of inadequate court infrastructure.

These structures, he intimated, are at advanced stages of completion.

Additionally, the President, in April this year, cut the sod for the construction of a permanent, modern Court of Appeal complex in Kumasi, which will help improve the justice delivery system for the northern sector of the country.

Again, with the collaboration of the Ministry of Local Government and the District Assembly Common Fund, 20 townhouses and a guesthouse are being built to be used as permanent residences for Court of Appeal Judges based in Kumasi, who will be mandated to handle cases in the northern part of the country.

Once completed, it will mean that appeals from Upper West, Upper East, Savannah, North East, Northern, Bono, Bono East, Ahafo, Western North and Ashanti Regions will be conveniently heard within a much shorter period.

Whilst in Prang, in the Pru West constituency, President Akufo-Addo also commissioned a newly constructed Administration Block for the Regional Feeder Roads Department.

Constructed at a cost of ¢3,831,826.86, the completion of the administration block is in fulfilment of a pledge made by the President to decentralise the citing of state institutions in various parts of the newly created regions, instead of the capital, which has always been the norm.