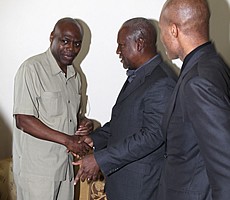 President John Mahama is promising to build a nation which will be all-inclusive with unity being the hallmark.

He says the death of Professor Mills presents an opportunity for all Ghanaians to have a common mind with a common vision.

President Mahama says he will do his best to maintain the current unity prevailing in the country.

John Mahama was speaking at the Castle when the host of VOA’s Straight Talk Africa program called on him to empathize with the nation over the demise of Professor Mills.

He said last Tuesday’s events were so shocking he didn’t like to recount them.

He promised to build on what the late president built.

Shaka Ssali said Ghanaians must take a cue from the President’s death.

He said he was happy that many Ghanaians were moving on with their lives after losing the nation’s leader.