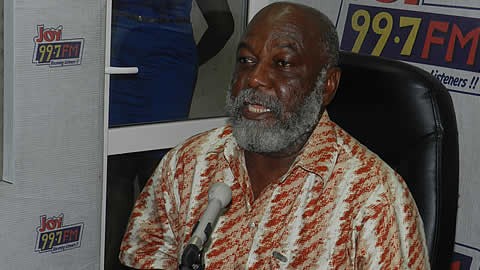 Sir (Prof), I read your views on the current state of press freedom in this country and I feel that you did not really hit the nail right on its head. Your view was taciturn than terse.

Sir, I am aspiring to get to your level and that of your compatriots. It is said that if one wants to be great, one must learn from great men. For this reason, I have been reading, “Fireman Series Ogyakrom:

I have read the two books for the umpteenth time, and I don’t get tired of going back to it. Beyond the history, it is like sitting in a lecture theatre listening to lectures on governance, politics, media practice and the list goes on. But the history part is so important to me.  The knowledge of the history of media repression, suppression and oppression at that time is valuable since it leads all and sundry who believes in media freedom to form just calculations with respect to the present and future of media freedom in Ghana and beyond.

Sir (Prof), you mentioned that the current issue of media attack is frightening. For me, frightening is an understatement. If in the era of military rule, where rule of law and the belief in human rights as well were thrown out of the window and journalists were arbitrarily abused and, the media suffered so much censorship and gagging, why should this happen in a democracy?

Sir (Prof), it is more dangerous to have media men and women living in fear in a democracy than in a military dictatorship. For, in military era everyone is aware that the independence and freedom of the media is not on the table; however, in a democracy where the constitution gives the media a right to be free and independent, but right in the eyes of the law, the media is suffering repression, oppression and suppression. What a paradox! That, the man who was one time an advocate of press freedom has elements in his government and party threatening and putting media men and women at risk.

Sir (Prof), this is beyond frightening. It is a betrayal. It is impunity. The response from the government has been so silent that this silence is deafening. To the extent that one is not convinced President Nana Addo Dankwah Akuffo-Addo’s current posture is a reflection of what he stood for some years back. Government’s silence and rhetoric is so unconvincing.

Why should journalists in a democracy walk on the streets of Accra with a police escort? Why should a journalist always look over his shoulders because he exposed some alleged corrupt activities of a regional minister? Why should the offices of a media house be ransacked by National Security operatives and the journalists tortured as well? The government of the day needs to be told in terse terms that, they are crossing the line and they have crossed it.

Sir (Prof), there is impunity in the air and this air is choking: Ahmed Suale is dead; Latif Iddrisu is still suffering from head injuries, and Manasseh Awuni Azure and Edward Adeti are looking over their shoulders.

Sir (Prof), kindly tell the man who you have once worked with on pursuing media freedom, “Mr President, your silence and rhetoric on the matter at hand is a betrayal to press freedom and Chapter 12 of the 1992 Constitution!”  Sir (Prof), kindly look into his eyes and tell him, “he that complies against his will, is of the same opinion still.”

I remain your admirer,