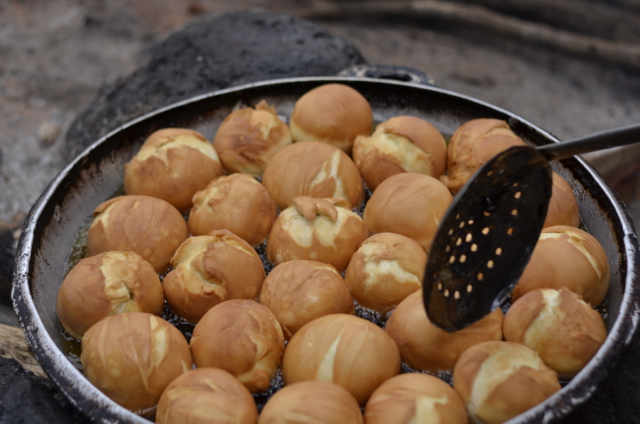 The rising cost of flour and cooking oil is taking a heavy toll on traders in the bakery and fries business.

Prices of buff loaf, popularly known as ‘bofrot’, and fried yam, are increasing at a major production hub in the Ashanti Region.

Traders at Anwia Nkwanta say they risk losing their business capital if prices are not increased to correspond with hikes in prices of ingredients.

‘Bofrot’ is made from flour, sugar and other ingredients, which is fried in hot oil under high temperature.

The tasty delicacy is often taken with a beverage in the morning, but some prefer taking it as snack in the afternoon.

The business is the mainstay of the Anwia Nkwanta economy. Travellers make a stop at the busy junction to have a taste of the brown balls.

Prices of vegetable oil have almost doubled in the past few days, currently selling at GHC1,000,00 a gallon from a little below GHC600.00.

With inflation hovering around 37.2 percent in September, food prices have soared. For about a week, the busy stop at Anwia Nkwanta has lost its main feature, ‘bofrot’ hawking.

Local stoves which are the production units at the time of our visit were empty.

According to the traders, the hike in price of cooking oil pushed them out of the business.

“This business was in existence before we were born. The oil is now sold at 1000 cedis and the ingredient for ‘bofrot’ is less than 1000 cedis. So we realised we had to put a halt to making ‘bofrot’ so we can find solutions”, Ama Adu is one of the traders.

For this reason, the traders have resolved to hike prices from GHC3.00 to GHC5.00. The smallest balls are going for GHC3.00.

They are uncertain about the survival of the business.

Meanwhile, the yam frying business which is an alternative for many here is also in recession.

The traders plan to increase the prices to five cedis for three pieces.

Leader of the yam sellers, Theresa Addai said though yam prices have been stable, vegetable oil prices have not.

“The prices of yam unlike the price of oil, are stable. So we have decided to sell 3 pieces of yam at five cedis”, she said.

It is unclear how the market will respond to the increment. There are concerns the Anwia Nkwanta ‘bofrot’ may go into extinction if the cedi depreciation which is said to be the cause of price hikes remains unchecked.

DISCLAIMER: The Views, Comments, Opinions, Contributions and Statements made by Readers and Contributors on this platform do not necessarily represent the views or policy of Multimedia Group Limited.
Tags:
bofrot
Cooking oil
Inflation