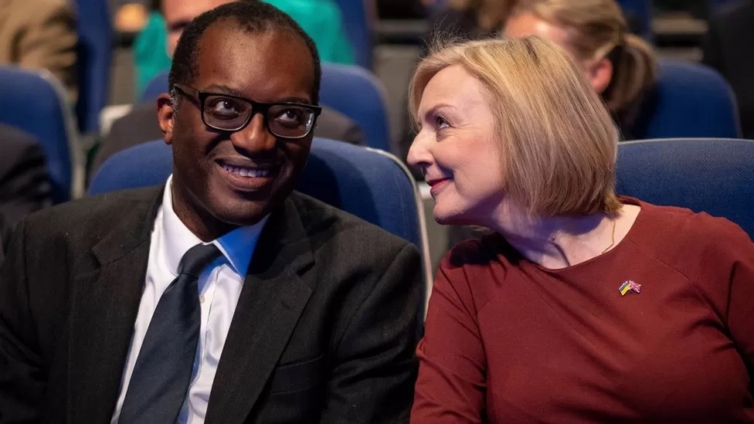 Kwasi Kwarteng has been sacked as chancellor amid intense speculation Prime Minister Liz Truss is about to junk key parts of their economic plan.

In a letter to the PM, Mr Kwarteng said her vision for economic growth was “right” and he still supported it.

Ms Truss is expected to announce a U-turn on business tax cuts at a news conference in Downing Street at 14:30.

Former health secretary Jeremy Hunt – who backed Rishi Sunak in the Tory leadership contest – is to take over as chancellor.

Ms Truss’s pledge to cut taxes was at the heart of the economic agenda that won her the Tory leadership at the start of September.

“As I said many times in the past weeks, following the status quo was simply not an option,” Mr Kwarteng wrote in his letter.

“For too long this country has been dogged by low growth rates and high taxation – that must change if this country is to succeed.”

Responding to Mr Kwarteng in her own letter, Ms Truss said she was “deeply sorry” to lose him and thanked him for putting “the national interest first” by standing down.

“We share the same vision for our country and the same firm conviction to go for growth,” Ms Truss wrote.

The dramatic dismissal of Mr Kwarteng makes him the second shortest-serving chancellor after just 38 days in the job.

A long-time ally of Ms Truss, Mr Kwarteng was seen as her political soulmate when he was appointed to the role on 6 September.

The prime minister has also asked Chris Philp to move to the Cabinet Office, meaning he is no longer chief secretary to the Treasury.

For days, Ms Truss has faced calls to drop parts or all of her economic plan to calm market turbulence and reassure her party.

Some Tory MPs have discussed options to remove Ms Truss as prime minister, laying bare divisions within the party, which has been in power for 12 years.

Ms Truss has already U-turned on her plan to scrap the top rate of income tax and some Tory MPs believe another change of course is inevitable.

A further U-turn is likely to seen as a blow to Ms Truss’s political authority only 39 days after she became prime minister.

Labour’s shadow chancellor Rachel Reeves said a “humiliating u-turn is necessary” after the government “plunged our economy into chaos and crisis with Truss’ discredited trickle down approach”.

“Changing the Chancellor doesn’t undo the damage that’s already been done,” she said.

“It started with Boris Johnson failing our country, and now Liz Truss has broken our economy, it is time for the people to have their say in a general election,” he said.

The mini-budget – announced by Mr Kwarteng on 23 September – included £45bn of tax cuts and an energy package worth an £60bn over six months, partly funded by borrowing.

There were few details on how the government would fund the package, which left financial markets reeling, sent the pound plummeting, and forced the Bank of England to bail out pensions funds.

The chancellor was due to make a financial statement on 31 October, but it is unclear whether that will change.

Meanwhile, financial markets rallied and the pound held firm as speculation mounts about a possible U-turn over the mini-budget.

The Bank of England has been buying government bonds – known as gilts – to try to stabilise their price and prevent a sell-off that could put some pension funds at risk of collapse.

But that support is due to come to an end on Friday.