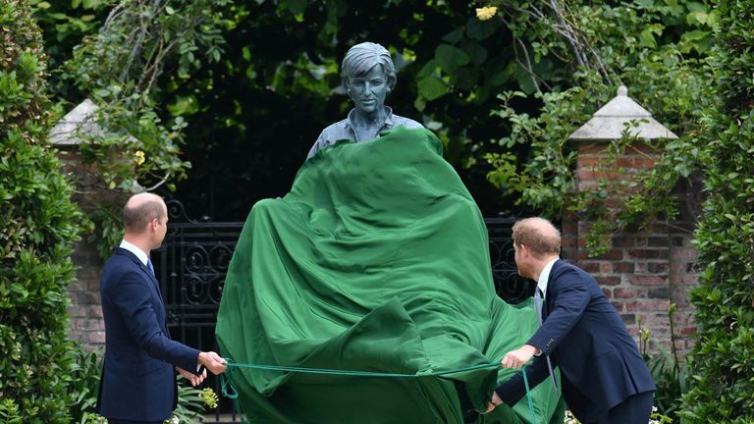 Prince William and Prince Harry stood side by side as they unveiled a statue of their mother on what would have been her 60th birthday.

A small ceremony was held at Kensington Palace for the unveiling of the Princess of Wales’s memorial statue, commissioned by her sons in 2017.

In a statement, Prince William and Prince Harry said: “Today, on what would have been our Mother’s 60th birthday, we remember her love, strength and character – qualities that made her a force for good around the world, changing countless lives for the better.

“Every day, we wish she were still with us, and our hope is that this statue will be seen forever as a symbol of her life and her legacy.

“Thank you to Ian Rank-Broadley, Pip Morrison and their teams for their outstanding work, to the friends and donors who helped make this happen, and to all those around the world who keep our mother’s memory alive.”

The unveiling was the first time the princes have been together since the Duke of Edinburgh’s funeral in April.

They mirrored each other, walking with their left hands touching their stomachs as they entered the ceremony.

Prince Harry clapped his hands as if in anticipation when he reached sculptor Ian Rank-Broadley, while William was heard saying “ready?” to his brother before they pulled off the cloth.

The design by Rank-Broadley, whose portrait of the Queen features on all UK coins, was kept secret ahead of the ceremony.

Kensington Palace said the statue, depicting the princess surrounded by three children, reflects her “warmth, elegance and energy” and the “universality and generational impact” of her work.

While two of the children are easy to spot when viewing the statue from the front, the third is partially hidden by the child on the right-hand side.

Beneath is a plinth engraved with Diana’s name and the date of the unveiling and a paving stone featuring an extract of the poem The Measure of A Man.

It reads: “These are the units to measure the worth of this woman as a woman regardless of birth. Not ‘What was her station?’ but ‘Had she a heart? How did she play her God-given part?”

The statue is in Kensington Palace’s sunken garden – one of Diana’s favourite places – which has been filled with more than 4,000 flowers.

The relationship between the princes has appeared strained in recent years, but they appeared at ease during the ceremony.

Sky News royal correspondent Rhiannon Mills said: “I think they are the images many people have wanted to see for quite a long time; to see the brothers alongside each other smiling, looking around, looking cheerful after what has been a difficult 18 months where this public rift has played out.

“Today, on what would have been their mother’s 60th birthday, it has been a time to put those differences to one side, to really show a united front and, in as much as they can, enjoy this special moment for them.”

Lady McCorquodale was a member of the six-person committee that commissioned and privately raised funds for the statue, alongside Julia Samuel, a godparent of Prince George who was a close friend of the princess.

The scale of the ceremony was smaller than planned due to the pandemic, meaning many of Diana’s friends could not attend.

People also gathered at the memorial outside the palace and left wreaths, notes and photos to mark 60 years since Diana’s birth.

One Diana fan, John Loughrey, said: “This statue means an awful lot to her two sons and to us and people around the world because now we’ve got a living legacy of all the work she’s done.

“She’s an immortal soul and she was very special.