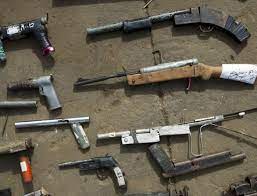 A Security Analyst, Dr Ismael Norman has said that the procedure used in acquiring arms in the country currently, is quite troubling.

He revealed that currently, people buy arms from the Police who sell it to them willingly.

“Again, the background check that the Police do, is not invasive enough. Then, of course, you have profiteers and of course, arms dealers who are also licensed to sell arms in their shops, ” Dr Norman added.

He spoke on Joy FM’s Super Morning Show Wednesday. The topic for discussion was the Jamestown robbery which happened on Monday, and the possession of illegal arms by the youth in the country.

To resolve the problem, the Security Analyst suggested that a national register of owners of small arms should be created.

He emphasised that the Ghana Police Service (GPS) and the Ghana Armed Offices need to use their knowledge and expertise to control this menace. “We must push them [Guns] out of the system,” he said.

Meanwhile, the Mayor of Accra, Mohammed Adjei Sowah, has called on the police to increase their efforts in retrieving unlicensed guns that are in circulation.

Speaking on Top Story Monday he told host, Evans Mensah that “I think our security agencies should step up a bit on retrieval of unlicensed firearms in the hands of many people. Nowadays, even in a community brawl, you will see people shooting in the air. You don’t know where they get the guns from, these are all matters of concern.”

These calls were made against the backdrop that on June 14, a police officer, Emmanuel Osei, and a hawker, Afua Badu, were attacked by a group of armed robbers who trailed a bullion van in a taxi and on a motorbike and upon arrival at a less crowded location, fired indiscriminately, killing them instantly.

The driver of the vehicle was severely injured and was rushed to the Korle-Bu Teaching Hospital for treatment. According to the doctors, the driver is responding to treatment.