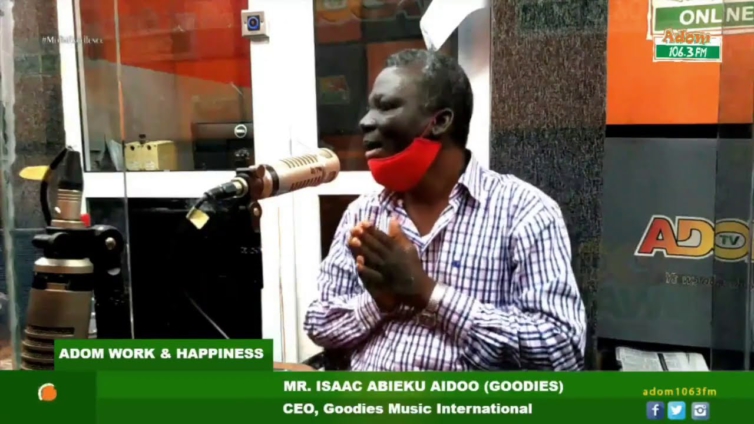 The CEO of Goodies Music International has opened up on life before and after he was arrested at the Kotoka International Airport (KIA) for possession of narcotic drugs.

Isaac Abeidu Aidoo, who managed top acts like TiC, Lord Kenya, Sydney and others, served a sentence at Nsawam prison for attempting to smuggle cocaine out of Ghana into the United Kingdom in 2008.

Narrating his life story on Adom FM‘s Work and Happiness show said he would not wish jail for even his enemy.

“Situations and conditions can put you in any situation and the first time I tried, that was my end. And I wouldn’t blame anyone but myself because I took the decision myself,” he said.

“I wasn’t really having money and I had a big project in London and I was the ambassador for the Olympics Committee and I was almost done with my Goodies Music Production there and I wanted to finish it.”

He stated that it never occurred to him that he would be arrested because he had been flying in and out of London many times than he could count on his reputation played a big role for him.

“Funny enough the person who arrested me was my family member but he didn’t know. It was later that he found out but God had already planned that. He had his reasons. I thought I was finished,” he told host Black I.

Mr Aidoo said that it felt good getting sentenced after facing immense pressure from the press, friends and the continuous trips to court.

“It is something I will advise people against. Once you have life there is hope. I wouldn’t even wish for my enemy to go to prison.

“Even if you put a chicken in a cage and you release it watch how it feels. It is like you are half-dead.”

DISCLAIMER: The Views, Comments, Opinions, Contributions and Statements made by Readers and Contributors on this platform do not necessarily represent the views or policy of Multimedia Group Limited.
Tags:
Goodies Music
Isaac Aidoo