Prof. Ahadzie: Should socio-political ideology be encouraged in the Ivory Tower? A research ethics perspective 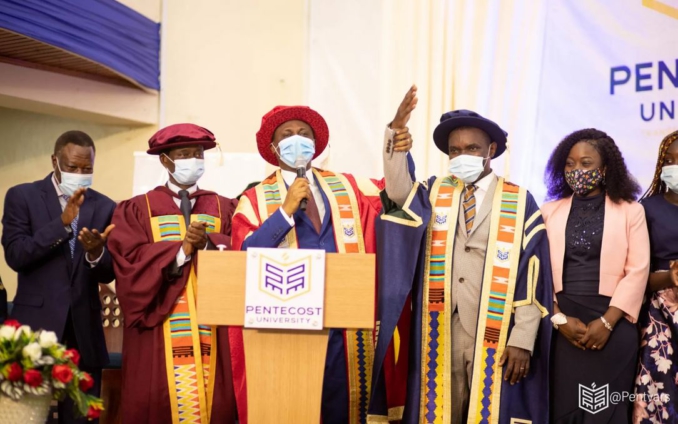 Vice-Chancellor of Pentecost University, Prof. Kwabena Agyapong-Kodua in his academic regalia designed by CDM Fashion Couture for his investiture

The interface between scientific theories and ideologies has been noted to often create anxieties and dissatisfaction in public discourse and could be described as an enigma. For instance, Larry Kreuger and Lawrence Neuman (2006) in the academic textbook titled “Social Work Research Methods” for qualitative and quantitative applications, published by PEARSON Educational Inc, acknowledge that, “most people find the relationship between social scientific theory and socio-political ideology controversial and confusing”.

This recognition of controversies and confusion, as identified by Kreuger and Neuman is normally pervasive in the mass media and is thought to be perpetuated often by people outside the scientific community, in pushing for what could be termed a spirited agenda.

Here, reference to fraternities outside the scientific community suggests that people who have the benefit of scientific and research training, whether inside or outside academia are expected to act cautiously, so to speak, not to dabble in what could be described as ideological propagation in an academic environment.

Indeed, Kreuger and Neuman are emphatic in stating that, “controversies arise because the scientific community recognizes theories as essential for clarifying and building scientific knowledge, while it condemns ideology as illegitimate obfuscation that is antithetical to science”.

If this posited view from Kreuger and Neuman is to be accepted as sound, then it seems right to pose the question being asked here, whether it is ethical for our campuses to discern into practicing active partisan politics, to the extent of potentially propagating socio-political ideologies on the campuses.

Here, the assumption is that, the propagation of socio-political ideologies may be occasioned to the detriment of championing engagements in the advancement of scientific theories. Indeed, I do not claim to have an answer to what the situation really is, that is why I can only assume at this point.

Nonetheless, I think from an academic and research philosophy perspective, the discourse is worth interrogating, as controversial and sensitive as it may be. However, first let us deal with, what is politics and/or what is sociopolitical ideology about?

Brian Holland (2015) in a paper titled, typologies of national urban policy: a theoretical analysis points to Harold Lasswell’s definition of politics thus; politics is about “who gets what, when and where.”

Tied to urban policy, Brain Holland further argues that, the issue of who gets what, when and where is linked to the “concept of society and the concept of space, place and geography”.

This, it is argued is at the core of political behavioral analysis and in understanding what motivates politicians and partisan followers to seek for the control of resources, be it from a logical or illogical perspective. It is also the reason why the stakes are always high in championing socio-political activities, because, in the end, it will be the pathway for some people to gain and others to lose, whether rightly or wrongly.

However, democracy which is the pathway for engaging in actual politics as we have been made to understand is to the extent that, through democratic means, there should be copious attempts toward equal representations and distribution of socio-economic resources and also in accessing opportunities at all fronts.

This notion of striving to achieve equality and equity is important as it is indeed central to democratic institutions and cannot be under-estimated.  That is why I believe civil society and interest groups have become major stakeholders in the political arena including academia. However, as is also well known, wherever there are competing interest groups, disagreements, conflicts and keeping to entrench positions cannot be avoided, because, human beings are by nature social beings, who form groups out of shared interests and needs.

This intent for shared interest is what often generates into ideological positions in politics and related domains. In the end, this produces competition and the quest to control resources. Granted that interest groups will always be part of socio-political activities, the question that may be asked is, should the academic community also just join in the chorus, because it is meant to be so?

Arguably, that would be a matter of contention, because as observed from the arguments above, an academic environment is supposed to thrive on the weight of research evidence/scientific theories and not socio-political ideologies.

That is probably the reason why academic freedom is also guaranteed in the Ivory Tower as enshrined in clause 21 (1b) of Ghana’s constitution. However, with active partisan politics now seemingly common on our campuses, should we just pretend that everything is normal given that, the interface between scientific theories and socio-political ideologies has the potential of undermining the so guaranteed academic freedom, if not now, may be in the near future?

As stated by Kreuger and Neuman; “theories and ideologies tend to offer assumptions for understanding the world around us”. However, there are also differences in many ways. For instance, “theory is neutral and always evolving whilst ideology is fixed.

Theory is based on scientific rigour whilst ideology is rooted in belief. Again, theory aligns itself to opposing views whilst ideology does not entertain opposing views. Ideology is also highly partial and often locked in specific moral belief.” In effect, anybody who holds on to an ideological stance is likely not to shift position, even when the opposing evidence may be overwhelming.

That is, if ideology is fixed and rooted in beliefs, then there is always the possibility that it will conflict with established theoretical positions. If so, then this could be a threat to advancing scientific rigour and arguments as suggested in the literature.

While it is expected that the academic environment will strive to be neutral and scientifically robust, the proliferation of socio-political ideologies has the potential of clouding the tenets of advancing academic excellence founded on sound theoretical paradigms. It is true that scientific theories can sometimes also be embedded with contradictions.

Where such contradictions exist, scientists always make all the effort to review and resolve them. Science is logical and often consistent. However, when there are contradictions in socio-political ideologies, the tendency is for competing interests to strongly stay blinded to opposing views.

Obviously, the same constitution that guarantees academic freedom also guarantees freedom of association including belonging to political parties. So, I have to once again clarify my position that this discourse is not about proposals for restricting political activities on the campuses. Rather, it is about engaging in an intellectual introspection of what could be the potential implication, judging by the limitations of ideologies as espoused in the literature.

Could it be that the current open display of active partisan political activities on the campuses is inhibiting opportunities for progressive intellectual discourse, for which logical theoretical reasoning may be compromised for political gain? Undeniably, a lot may be related to the status quo in the way public discourse is shaped in the country.

Suffice it that, in this context, when one refers to the tenets of science and theories, the ivory tower is obviously the first place that comes into mind with the expectation that, there is adherence to the highest form of ethics in ensuring that standards are not comprised.

Be that as it may, it will be unthinkable for anyone to propose that political activities should not be encouraged on the campuses, because even political science as a course is part and parcel of academic training.  The issue has to do with how to balance the sources of knowledge so that socio-political ideologies do not become the dominant thinking in driving public discourse at the expense of science and theory.

I write this not as expert in political science but as an academic who is interested in championing good research ethics and application in the society. While putting pen to paper, I was imagining myself in the Lecture Hall teaching students about the difference between theories and ideologies in a Research Methods class. That is the conundrum that I believe many lectures may be facing in an atmosphere of active socio-political activism, supposedly driven on ideologies.

Definitely, Politics is always going to be part of the society and I am just thinking, how can this interface between theories and ideologies be best accommodated so that it does not potentially lead to undermining theory development in academic engagements and in application.

Perhaps, one way out is to create avenues for open academic debates on the campuses, premised on strict theoretical establishments in the academic sense. There is obviously the need for such revering opportunities which would offer students and lecturers the opportunity to argue and challenge the status quo in theoretical positions, towards advancing knowledge.

Are there any lessons that can be learnt from what happens at a debating forum similar to what happens in the Oxford Union? Politics is indeed part of society and may thrive on ideologies as is other sources of knowledge, however as noted by Kreuger and Neuman, the interface between ideology and theory has implications for how one undertakes research, engages in academic debates and ultimately apply knowledge to impact change in society.

The subject matter may be controversial, nonetheless, it is my view that, we would need to discuss it anyway sooner or later. I do hope that this modest effort helps in opening up for more engagements on the way forward, if necessary at all.

The writer, Prof. Divine Ahadzie, is a Research Fellow at the Kwame Nkrumah University of Science and Technology, Kumasi. He is the Regional Editor for Africa for the Journal of Building Pathology and Adaptation published by Emerald. He is also the winner of the 2020 Emerald Driving the Impact Agenda for research.

DISCLAIMER: The Views, Comments, Opinions, Contributions and Statements made by Readers and Contributors on this platform do not necessarily represent the views or policy of Multimedia Group Limited.
Tags:
Academic freedom
Prof. Divine Ahadzie
socio-political ideology