Prof Kwesi Yankah: Winding down on J. B. Danquah with comic relief 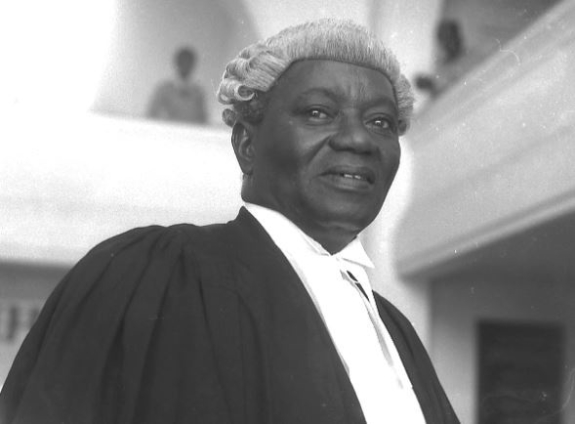 The Big Six provide enough food for thought, not just in dry seasons but at all times.

They could move you to tears as you reflect on Ghana’s past, but they could also put smiles on your face, better still if you sport a dimple!!!

The story of the Danquah-Nkrumah duet may have produced a little cacophony, but fancy a world without such notables who opt to express their love for country by crossing swords.

This explains the slices of theater I have sought to reproduce in my previous posts, recounting riddles and dilemmas the two statesmen spawned.

But theatre has not ended.

On or about 6th March 1997, I finished my household chores at Legon early enough to chase a theatre production at Accra Arts Centre on the High Street.

It was a special event to commemorate Ghana at 40. The NDC Government had thought it prudent to add theatre performances within the program of events.

Advertised was a play to be performed by Abibigromma, the renowned National Theatre group.

The featured play was The Third Woman, written by a very unlikely playwright: J. B. Danquah. In addition to fighting to birth a nation state called Ghana, as well as his various roles in the Gold Coast Legislative Assembly, the Big Six, the United Gold Coast Convention, etc., Joseph Boakye Danquah also translated his erudition in African philosophy into theater.

The Third Woman was written in 1943. Putting that complex play on stage to celebrate Ghana @ 40, needed an experienced caste and theatre group, and Abibigromma was fit for purpose.

The Director of that production was the late Allen Tamakloe, whom I used to call my brother-in-law.

The play, as it rolled out, was an engaging marathon, and ended with an extended standing ovation for the excellent rendition by National Theatre Company, but particularly for the Third Woman herself, played by charismatic Irene Opare.

Curiously, one of the memorable outcomes of the show, was a personal discovery I made not from the show itself, but seated beside me.

Thirty minutes before the curtain lifted, I had walked into the performance hall looking for a seat on the front row, and had swiftly scanned for one slot.

I got comfortably seated waiting for the show to start.

The location was the auditorium of the Accra Arts Centre, which was on its last legs, because a brand new national theatre was under construction.

Comfortably seated I looked well to my right, and who was seated next to me? A legendry lawyer often met through hearsays and whispers only; smallish, dark, sporting red lips, and pensively looking on the vacant stage.

Oh mine! It was the legendary Tsatsu Tsikata! I can swear I nearly collapsed, rubbing shoulders with the renowned legal whiz kid, then a lecturer in Legon. And was he also into plays? Hmmmm.

I wondered if I could ever start a conversation with him.

I would probably begin by intoning through my nose, ‘Sir, are you sure you are not the Dilemma of a Ghost?’ I took a risk thinking a chat would be a nightmare, but I was wrong.

We spoke heartily for 15 minutes without uneasy breaks. In the end, I took home a bigger surprise package.

The gentleman, Tsatsu Tsikata, had spoken to me in perfect Fante! Ewuradze! Apparently, Mfantsipim College where he did his secondary education, may have injected considerable doses of the Fanti vaccine into young Tsatsu.

The whole incident happened in the misty past, and Tsatsu may forgive me if this is a case of failed memory.

If my recollections are right, I should say J. B. Danquah’s play, The Third Woman, succeeded in bringing me face to face with the living legend, Tsatsu Tsikata.

A dreaded nightmare had turned into a pleasant dream!

But the real squaring off came in 2006, when I had offered to speak on the platform of the J B. Danquah Memorial Lecture series, instituted by the Academy of Arts and Sciences.

This is a platform where fellows deliver a three-day lecture, often expected to amplify the values and ideals espoused by J.B. Danquah.

A significant aspect of the Danquah platform was the added opportunity it gave to interact with the family of J B Danquah, who were the Academy’s special guests each year.

Over the years, this has made me fairly well acquainted with his children and relations, Hilda, Josephine, Iris Danquahs, etc. often cheerfully seated on the front row.

One such event brought me face to face with the late ever smiling J.B. Danquah-Adu at the British Council Hall.

Years before, I had voraciously read J. B.’s classic book, The Akan Doctrine of God and others which reveal Danquah’s close intimacy with indigenous traditions and practices, particularly religion and language.

Over a three-day period in March 2006, I took the Academy and the general public on a trip, exploring the consolidation of Ghana’s democracy through indigenous languages.

I sought to link my own interest in language and indigenous traditions with Ghana’s deepening constitutional democracy.

My key links to the past in this meticulous engagement, included veteran politician C. K. Tedam, who was then alive, and helped me with perspectives from past national and local assemblies.

But I had also buried my head for weeks in past parliamentary Hanzards at the well-resourced library in Parliament. One Mr Brown was in charge.

I then touched base with relations of past and contemporary sages and politicians whose success in politics rested more on street wisdom than literacy and the Queen’s language.

The Verandah Boys of the CPP came in handy, so were notable illiterates and semi-literates who had been elected to Ghana’s Constituent Assembly to draft the 1992 Constitution.

It was indeed historic, hosting at the Danquah memorial lecture, relations of CPP’s celebrated Krobo Edusei, Nkrumah’s Minister for the Interior, a highly formidable verandah boy with modest western education; and relations of former District Commissioner for Akim Oda, the great Kwame Kwakye, who it was said in jest, had his own English dictionary.

Add to these in the auditorium, the Danquah family, Academy fellows, students from various academic institutions, and a curious variety of people from far and near, and you would happily proclaim that a sufficiently diverse quorum had been formed for typical Academy proceedings to hold.

Behind the podium was my good self, with Nana Dr. S.K. B. Asante, President of the Academy who is also the Paramount Chief of Asokore Mampong, Ashanti, majestically seated on stage.

The highly venerable Nana, lawyer by profession, was regally adorned and ably chaired the proceedings.

With us in spirit that day, were Dr J. B. Danquah and Osagyefo Dr Kwame Nkrumah, patron of the Verandah Boys.

At the end of the three-day lecture, I was on record to have been the 39th Speaker in the J. B. Danquah lecture series.

If Danquah’s interest in language and indigenous institutions was phenomenal, his impact in establishing and accessing higher education was even more notable.

The man J. B. Danquah needs to be saluted for accelerating Ghana’s access to university education. His initiative led to the establishment of the University College of the Gold Coast, now University of Ghana.

In the mid-1940s the Colonial Government decided that they would support the establishment of just one university college for the whole of British West Africa, to be built in Ibadan, Nigeria.

The Gold Coast would not accept this. Led by scholar and politician J.B. Danquah, and others, they advised the British Government that Gold Coast could financially support its own University College.

The colonial government thereafter reviewed its decision and agreed to establish the University College of the Gold Coast, to be affiliated to University of London.

With a 1925 Bachelor’s degree from the University College of London up his sleeve, Danquah knew the tremendous impact of higher education on the quality of public service, and selflessly mobilized farmers of the Gold Coast to contribute to start the University.

He persuaded the cocoa farmers to sacrifice a portion of their harvest, to raise seed funds for the purpose.

The Akuafo Hall of the University College of the Gold Coast (now Ghana), was so named in 1956, to honor farmers for their foresight and initiative in funding the start of a university, which seventy years on, has inspired the founding of several others across the country.

The mastermind behind the entire project was the doyen of Gold Coast politics, J. B Danquah.

It is not surprising that the President, Nana Addo Dankwa Akufo-Addo, grandnephew of J. B Danquah seeks to upscale his mentor’s educational project, by exploring the offer of scholarships to children of cocoa farmers entering the university.

It is my understanding that the Ministry of Education has been actively fleshing out the details with other relevant agencies.

Featured on the stamps were J B. Danquah alongside Reverend Martin Luther King Jnr, the great black American civil rights leader who was assassinated in 1968, three years after Danquah’s agonizing death.

The two great men, Danquah and Martin Luther King had sacrificed their lives in defense of human rights, one in Ghana, the other in USA.

J B Danquah would thereafter blink and recoil into lifeless bronze.

This concludes my modest contribution to this year’s Heritage Month, featuring personal Encounters with the Big Six.

Happy Anniversary to all.