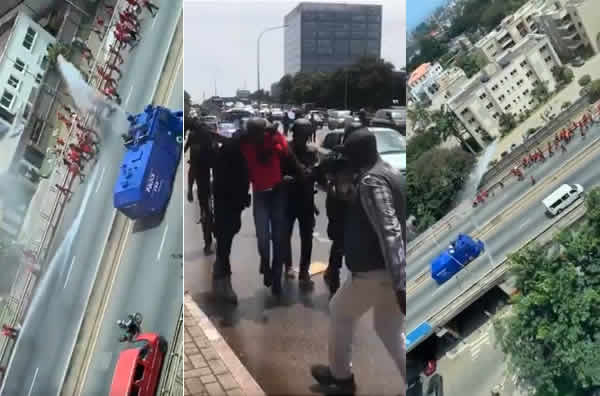 At least nine protesters have been arrested in a protest demanding reforms in Ghana’s legal education system.

The arrest included three members of the Economic Fighters’ League which joined the law students protest in solidarity. Two conveners were also bundled into police vehicles.

Police fired rubber bullets and showered protesters with water from their cannons.

The violence began following disagreement over the route of the demonstration. According to JoyNews’ Komla Adom, the police said they had no information that the protesters would be heading to the Jubilee House, the seat of government.

The police insisted they had no permit to proceed and resisted the protesters who had gathered at Afrikiko, about a 100 meters away from Jubilee House.

The otherwise peaceful protest turned violent as water cannons chased away protesters. Some students showed injuries they say was caused by the rubber bullets.

A cameraman with Yen.com was also injured by the bullets. He had a cut on his right arm, JoyNews’ Komla Adom reported.

He was rushed to the Police hospital in Accra.

The arrested protesters were sent to the Central police station where their statements were taken, a convener Regina Amegah told JoyNews.

She decried the use of ‘brutal force’ by the police. “They sprayed us with water cannons both hot and cold. I was drenched from head to toe” she said.

The demonstration was to dramatise their frustration with the education system following another mass failures in the law school entrance exams.

The protesters had planned to submit their petition to the Presidency. But they couldn’t. ‘All copies of the petition are soaked’ Regina Amegah said.

The law student explained the police was informed 10 clear days to the demonstration but three days to the protest, the police called the leaders to cancel the march.

The leaders refused. The protest came on.

After the police resisted the march beyond Afrikiko, some of the leaders tried to negotiate with the police, asking for at least a delegation to go to the seat of government to present the petition, she said.

In the ensuing chaos, some of the students had to seek refuge at the Canadian High Commission, she said.

DISCLAIMER: The Views, Comments, Opinions, Contributions and Statements made by Readers and Contributors on this platform do not necessarily represent the views or policy of Multimedia Group Limited.
Tags:
Economic Fighters League
Law Students
Police fire
Protests