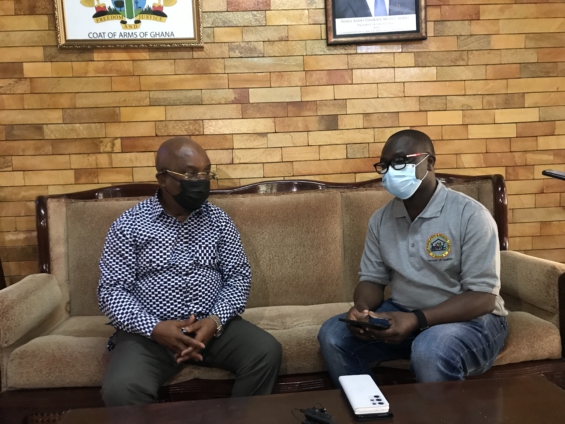 The Volta Regional Minister, Dr. Archibald Yao Letsa, has assured that personal details captured by officials of the 2021 Population and Housing Census are confidential, thus won’t be given to any third party.

He therefore urged residents to ensure they provide accurate biodata.

“Details captured by the officials are confidential and won’t be given to a third party, hence i urge you to provide accurate information about yourselves willingly,” he advised.

According to him, securing accurate data through the exercise is important for the governance of the country, since it is geared towards gathering data that would be used in planning the country.

He said this when a team visited the residency in Ho to enumerate him and his household.

“Without the census, we will not have the accurate data to plan for our economy, to plan for education, health, and every aspect of the economy. So it is important we know how many people are resident in Ghana, the various age groups and the various socio-economic groups of our country”, he said in an interview with Myjoyonline.com.

Dr. Letsa expressed satisfaction with the process and lauded efforts by the various MMDCEs towards a successful census.

The Regional Statistician, Chris Amewu, who led a team to the residency, to count Dr. Archibald Letsa and members of his household, entreated the citizenry to cooperate with the enumerators.

He indicated that the Statistical Service has employed the use of ICT (use of tablets) to ensure data gathered would be processed and delivered by the end of August, 2021.

He advised that persons who may not be contacted by the end of the 2-week exercise should report to the District Census offices for the necessary follow-ups.

The 2021 Population and Housing Census night was marked with various activities in the Volta Region.

The regional capital of Ho, witnessed a float, while enumerators took details of persons who live on the streets or spent the night in guest houses, hotels among others.