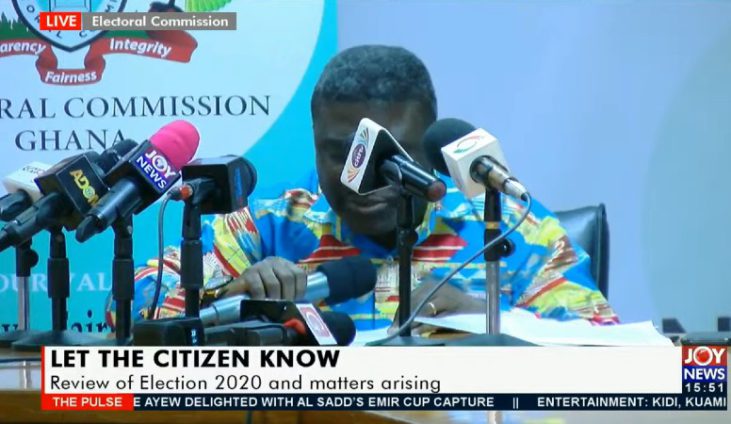 Speaking at a press conference on Monday, October 25, the Deputy Chairperson of the Electoral Commission (EC) Dr. Bossman Asare, stated that “the Former President has said the EC thumb printed 1million ballots in favour of the president. This is untrue.”

“We call on the former President in the interest of our democracy to provide evidence of the stuffing of the ballot boxes by the EC. This is not a matter to be ignored and we call on the Ghana Police Service to investigate this,” he added.

His comment comes after former President John Dramani Mahama alleged that many things went wrong during the 2020 presidential and parliamentary election.

Among other things, he stated that military invaded collation centres and forced Electoral officers to declare results while some one million extra ballot papers were printed after the official printing exercise.

“This is one of the worst ever elections we’ve had in Ghana. So many things went wrong,” he told the Eastern Regional House of Chiefs and the Clergy in Koforidua as part of his thank-you tour to the Region on Tuesday, October 12.

However, Mr Bossman Asare believes that the transparent processes employed by the Commission made it totally impossible for overvoting or ballot stuffing to take place.

He explained that at the polling stations, prior to the start of the elections, empty ballot boxes are opened and displayed in the presence of everyone, and thereafter they are sealed.

“There are serial numbers on the ballot papers for each region and constituency. This is made known to the agents before the elections. Our ballot papers also have security features, so any trace of new material will be clearly visible. Ballot Stuffing cannot be done – it is impossible,” he stated.

The Deputy Chairperson of the Electoral Commission added that across the 38,622 polling stations, only the parliamentary election at Savelugu recorded a case of overvoting.

“Again, at the end of the poll, the ballots cast are crosschecked against the voters who were verified and issued the ballot papers. The transparency of our processes from the beginning to the end makes this impossible,” Mr Bossman Asare stressed.

He stated that because these claims can lead to a lack of confidence in the election process and system and also derail and undermine Ghana’s democracy, the police should as a matter of urgency investigate the claims.