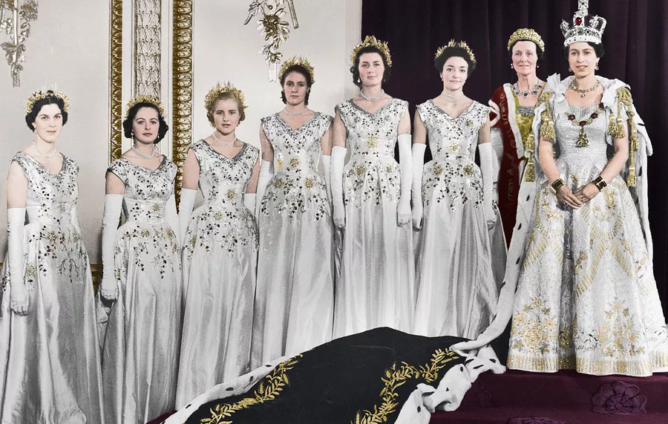 Queen Elizabeth and her maids of honor at her coronation. (PHOTO: THE PRINT COLLECTOR/GETTY)

Lady Mary Russell, one of Queen Elizabeth’s maids of honour on her coronation day, died just one day before the late monarch’s state funeral on September 19. She was 88.

The Times obituary section reported the death, detailing that the wife and mother of five died “peacefully” at home with her family on September 18.

She and her husband, David, shared three sons, Anthony, Philip and Jason, and two daughters, Arabella and Mariana, as well as 12 grandchildren, according to the obituary.

Queen Elizabeth’s state funeral, held the next day at Westminster Abbey, welcomed more than 2,000 family members, guests and heads of state to pay their respects to Britain’s longest-reigning monarch.

At just 19, Lady Russell was the youngest of six maids of honour in attendance at Queen Elizabeth’s coronation at Westminster Abbey in 1953.

The six ladies wore embroidered silver gowns with long silk gloves and tiaras as they held the Queen’s six-yard train through Westminster Abbey.

Lady Russell’s father, the Earl of Haddington, was a childhood friend of the Queen Mother from Scotland.

On the day, Queen Elizabeth wore a white duchess satin dress designed by Sir Norman Hartnell, the same designer who made her wedding gown in 1947 and designed her maids of honour’s gowns.

The personal touches included — embroidered flowers to represent the United Kingdom and the Commonwealth countries — which were the product of Queen Elizabeth’s request.

They added such weight to the gown that it is estimated to have weighed over 11 pounds.

Lady Russell recalled the tremendous weight of the gown, too, as though it was a distraction on the day.

“It was overwhelming and moving – especially during the anointing,” Lady Russell said about the coronation. “It was an incredible moment, but all I could think about was how heavy the embroidery felt.”

The honour of being selected as a maid of honour was not lost on Lady Russell. “Of all the girls our age in the country, we six girls were chosen to carry the Queen’s train and that meant a great deal,” she said.

One of her fellow maids of honour, Lady Anne Glenconner, told the BBC that the six ladies were “the Spice Girls of their time” after holding such an important role in the coronation.

The spectacular coronation ceremony took place a full year after her father’s unexpected death. After suffering from lung cancer and having one lung removed, King George VI died suddenly at home in 1952. It was later revealed that he died of coronary thrombosis.

Following his sudden death, arrangements were quickly underway to plan his daughter’s coronation, though she ascended the throne more immediately.

Queen Elizabeth was laid to rest earlier this month alongside her beloved father and mother in the King George VI Memorial Chapel at Windsor Castle. Instead of receiving her statue or a memorial with her name, the Queen reportedly wished to lie alongside her family.

Her sister Princess Margaret and her husband Prince Philip are also buried there.

“She had no wish to see a statue of herself or to even have a separate burial chamber within St. George’s Chapel,” historian Robert Hardman, author of Queen of Our Times: The Life of Elizabeth II, told PEOPLE.

“As her cousin, Margaret Rhodes once said to me, ‘She wanted to make her father proud.'”