Rainstorm destroys homes, schools and other property in Obogu community 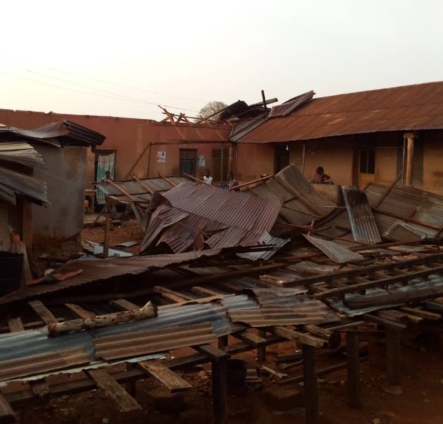 A rainstorm has wreaked havoc in the Obogu community in the Asante Akyem South District in the Ashanti region.

The roofs of some buildings were ripped off, and others completely collapsed. The primary power transformer was also destroyed, as were other electricity polls.

No casualties were recorded.

“I sent my child to the hospital yesterday, but due to the storm, I went home only to find the roof of my house ripped off by the storm. I had no choice but to wander around until this morning,” said Kofi Adiyiah.

Kwadwo also said he was lying on the carpet in his room, “and suddenly my door opened forcefully due to the storm. Then the roof ripped off, and the wood on the roof fell into the room”.

Some residents, however, say their source of income is in jeopardy because structures in which they ply their trade and vocation have been destroyed.

Hairdressers, artisans and traders are among those who are affected.

“I was terrified, but we had nowhere to go,” said Ataa, a pregnant woman.

“I was in my room in the evening with my child when the storm wet my child and myself. My shop is also destroyed”.

The community is pleading with the National Disaster Management Organisation (NADMO) and the local authorities to help them find a solution to their problems.

DISCLAIMER: The Views, Comments, Opinions, Contributions and Statements made by Readers and Contributors on this platform do not necessarily represent the views or policy of Multimedia Group Limited.
Tags:
Asante Akyem
Obogu community
rainstorm