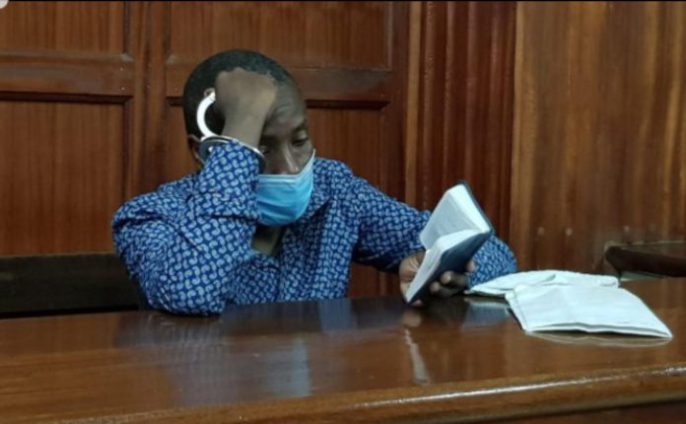 A primary school teacher caused drama at the Milimani law courts in Nairobi moments when he was slapped with a 20-year jail term for defiling a standard six pupil five years ago.

Fredrick Mwangi Wango who acted unperturbed in court ignored the judge and distracted himself with a small Bible he was reading throughout the sentencing.

In a fit of anger, Fredrick Mwangi Wango, 45, cast down a New Testament Bible he was earlier reading before the sentence was passed.

And at the corridor outside the trial court, Wango who was being escorted to the cells by a lady prison warden attempted to sprint away but she had held him firmly.

The warder beckoned a colleague to assist escort the defiler to the prison cells to start his term.

Before senior principal magistrate David Ndungi announced his verdict “Wango had said prayers while covering his face with a white face towel.”

He was also spotted reading the scripture while in the dock.

But after he was sentenced, he cast down the New Testament Bible together with the face towel then yelled, “Jesus why have you forsaken me yet the scriptures I read assured me l will be set free.”

While lifting his hands towards heaven he again quipped, “Jehova God you are righteous what has happened to me now? Jesus my savior do I really deserve this jail term. What have I done to deserve it.”

Inside the cells, he clung at the grilled prison door as he continued wailing.

While sentencing him, Mr. Ndungi said he violated the rights of the minor instead of protecting them.

He rejected the accused mitigation that “he should be given a second chance in life to reform and take care of his two children.”

“Your children’s rights are not superior to those of the girl you defiled repeatedly until she lost count between 2015 and 2016,” Mr Ndungi said.

Wango, a father of two, who teaches in a city school, begun his drama last week when he collapsed upon being convicted then cried uncontrollably.

After the accused recuperated he was asked to remain seated so that the court could finalize delivering the judgment.

The magistrate said the accused had made it a routine to defile the girl.

“The girl could not remember the number of times the accused defiled her then threatened her with dire consequences should she disclose the illicit and illegal affair,” Mr Ndungi stated.

The magistrate said the accused lured the girl to his Mathare Estate residence around 6.00 am when she was heading to school on the day his illicit affair was discovered.

Wango locked up the girl then went to school and returned after 9 am to carry out his secret mission.

The teacher Fredrick Mwangi Wango was said to have defiled the said student who was in standard 6 at Moi primary school, when he accommodated her in his house at Mathare Estate in Nairobi within Nairobi county on March 2016.

According to the police report, the father of the complainant who was too drunk left her under the care of Mwangi who is a married man with two children for half a year.

The police report read “She was taken to two different schools but would always go back to Mwangi’s house making us suspicious.”

When first interrogated by gender and children desk officers to establish whether there was any relationship between her and Mwangi, she denied it. However after police officers escorted the girl to the hospital for a check-up, she was later subjected to vigorous counselling before she opened up.

She said Mwangi had been sexually violating her since she started living with him in his house, threatening her not to disclose it to anyone.

While passing the sentence, senior principal magistrate David Ndugi said; “The accused is a teacher but he defiled a child, the right of his children are not superior to that of the child he defiled, I hereby sentenced him to 20 years in prison as provided by law.”