Rating the performance of the Ghanaian contingent in La Liga 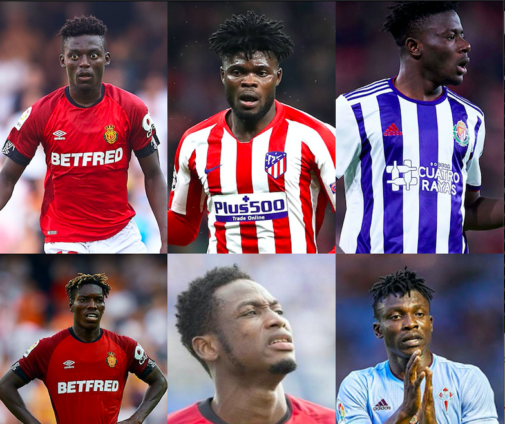 The six Ghanaian players in La Liga this season.

La Liga has become an ideal stepping stone for most Ghanaian players over the years.

This season, the Spanish top flight had six Ghanaian players in their books.

As La Liga season comes to a conclusion today, the Joy Sports team run the rule on how each of these players performed for their respective teams.

Partey’s continuous rise at Atletico Madrid continued this season as he proved his worth yet again.

His performances in the big games caught the eye with his best performance coming in the Madrid derby at the Wanda Metropolitano where he was awarded man of the match.

As a result, the combative midfielder has been linked with a move away from the Spanish outfit with Arsenal reported to have the most concrete interest.

Simeone’s trust in Partey is demonstrated in how often he has called upon the Ghanaian this season. The midfielder has played in 34 La Liga games – the most he has ever managed at Atletico Madrid.

Partey has also matched his best ever goal scoring tally in La Liga as he scored his third goal of the season against Getafe last matchweek.

Champions League football is wrapped up but Atletico Madrid need at least a point in the final day to finish third and complete a massive turnaround since lockdown.

Baba was very instrumental in Mallorca’s promotion to the top flight playing in 28 matches in the Segunda Division.

His influence in the team has only grown since as he has played in 35 out of the 37 La Liga games this season.

The Ghanaian ranks fourth when it comes matches completed, finishing 31.3 matches this season.

Despite his great efforts in the middle of the park, Mallorca are already relegated heading into the last matchday.

Baba’s impressive performances have seen him being linked with Atletico Madrid as a possible replacement for his international compatriot Partey.

Despite the fact that Celta Vigo are one goal away from conceding half a century of goals, Aidoo has been a standout performer.

The Ghanaian center back has featured in 31 games so far this season, starting 26 of them.

Aidoo has won 24 tackles so far in La Liga and made 44 interceptions which ranks him sixth and second respectively among his team mates.

The 24-year-old’s efforts have not been enough as Celta Vigo are stuck in a relegation battle heading into the final day of the season.

They sit 17th on the table with 36 points, just one point above Leganes. Aidoo and his team mates will be hoping for a win when they face already relegated Espanyol.

It has been a season to forget for Rahman. A lot was expected from the Chelsea man when he joined on loan.

On paper, he was supposed to push fellow Ghanaian Lumor Agbenyenu for the left back slot.

Unfortunately, he’s done far from that, suffering two long-term injuries throughout his stay in Spain.

Rahman has played just three games since joining Mallorca, adding up to a total of 198 minutes of football.

His last game was a 4-2 loss to Getafe in September 2019 and with Mallorca already relegated, it is unlikely the Ghanaian will be retained.

Real Valladolid are safe heading into the final round and that is due to how impressive they’ve been defensively.

They’ve kept 11 clean sheets and conceded 43 goals – the lowest in the bottom half of the table.

Salisu has been a key part of Valladolid’s defensive shutout. He’s played 31 games this season, starting 30 of those games.

It comes as no surprise that he’s been linked with other European teams such as Southampton, Rennes and Manchester United.

It has been a mixed bag season for Agbenyenu. Struggled to settle in the league and never really showed any real consistency with Mallorca.

The Ghanaian played in 22 games, starting 19 but failed to impact the team going forward. Expectations were especially when it comes to attack because that was one of his key strengths.

He ended the season with no goals or assists, however, he attempted 69 crosses with an Expected Assists of 1.9 suggesting that perhaps the 23-year-old was unlucky.

Defensively, he made 25 interceptions and won 22 tackles although Mallorca conceded 63 goals this season.

With Mallorca relegated, it remains to be seen whether Agbenyenu will go down with the club or try and look for a way out considering his ambitions for the national team.