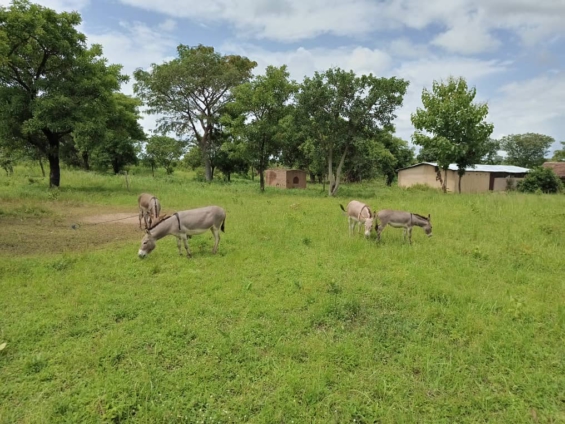 Eliminating poverty is not a charitable endeavor; rather, it is a matter of justice and the key to releasing a vast amount of human potential.

There are thousands of deaths caused by a lack of food and clean water every single day of the year, and about half of the world’s population lives in poverty.

Rural farmers are frequently the hardest hit by food insecurity and water shortages that make it difficult to live better in many parts of the world.

Ghana’s rural community is woven together by agriculture, therefore any abrupt changes that have a significant impact on this sector could have a negative impact on the social and political stability of a country.

Farmers’ output levels are being impacted by recent changes in weather patterns along with a loss of soil fertility and productivity on degraded fields.

In terms of sustaining employment, supplementary enterprises, environmental services, economic and social infrastructure, this has an impact on rural development.

The rural world is the place to start if we want a world without hunger and poverty. Around 3.4 billion people, or 45% of the world’s population, are thought to reside in rural areas of developing countries.

The majority rely on modest, family farms for both their livelihood and sustenance. Despite producing the food that sustains their countries, rural residents are disproportionately poor: rural areas, not cities, are home to 80% of the women, children, and men living in extreme poverty.

Investing in rural communities’ residents is a long-term answer. Hunger, poverty, young unemployment, and forced migration have strong roots there.

Thousands of people live in Zongo Macheri, which is in Ghana’s Oti area, and at least 90 percent of them are farmers. This indicates that farming is their primary method of subsistence. But because of changes in weather patterns and soil deterioration brought on by continued farming, agricultural activities are becoming unappealing.

Gellin Magnanbi Joseph, for example, could harvest 10,000 tubers of yam from his 10 acres ten years ago, but times have changed. He was now harvesting between 3000 and 4000 tubers.

This is a significant loss for Gellin, given that an acre of farm with approximately 3000 Yam mounts produces about 2000 tubers of Yam.

The 31-year-old says he did nothing wrong. “Nothing until the rains came.”

“The rains arrive at an inconvenient time. Over here, you wake up, feel like planting, and go plant.”

Regret, on the other hand, has not been regretted by Gellin.

“I’ve never regretted being a farmer because I was born into it, and my father never did.”

But what can Gellin do to change the narrative?

Conventional farming has been identified as a major contributor to global climate change and biodiversity loss.

Overuse of synthetic fertilizers and pesticides, as well as relentless tilling, have resulted in a new chain of negative consequences, including extreme water and soil pollution – an estimated 25% of arable soils worldwide are degraded.

It is also responsible for 24% of all man-made greenhouse gas emissions.

Experts believe that the indigenous farming system requires immediate reform in order to feed a growing population and provide better livelihoods for farmers.

If the soil was bare, you could see Clement Matorwmasen wielding a cutlass in the midst of his regenerative farm from a distance.

The Entrepreneur, lecturer and IT expert in Data management could be seen keeping track of and observing the development of his trees, shrubs, and crops.

Several decades of cotton and cereals growing had entirely exhausted the soil in Zongo Macheri, making it exceedingly dry and crowded when Syntropic farming was first introduced.

After growing up on the streets and facing death and devastation in prison, a brave young tribesman is breaking the cycle of misery by constructing a village for dreamers alongside his rural Ghanaian community.

Clement’s words of encouragement have guided him throughout his restoration project: if you overcome enough minor hurdles, eventually the major ones will take care of themselves.

The “Moringa Man” is renowned for his commitment to using moringa to relieve chronic malnutrition in numerous rural villages.

“It’s been a difficult trip, and there have been times when it didn’t make sense to go on as I was equally smart to find other ways to improve my life and increase my income,” Clement said.

But the question still stands: Is it financial? What keeps Clement is fostering a regenerative atmosphere where everyone prospers and a future that the future generation can be proud of.

A total of 140, 258 plant species make up the regenerative farm, many of which contain fruit trees and crops for economic reasons.

The environment has completely taken over Clement’s coding mind, despite the fact that he hasn’t hung up his coding boots as an IT specialist and data administrator.

Clement did not grow up as a farmer; he was born in Accra and spent time in Takoradi before becoming a cowboy in Tamale, where he fell in love with farming.

He has a variety of animals, including sheep, chickens, rabbits, and donkeys.

Various bird species have been drawn to the trees because of their beauty and healthy condition.

Clement and his team at Green Gold provide training and support services to smallholder farmers and farm-based corporations on how to grow food commodities responsibly, efficiently, and sustainably in the face of climate change.

Smallholder food producers use agroecology/syntropic agriculture to work with nature to adapt their land use to changing environments, use water more efficiently, and build soil health so that they can thrive as the climate changes.

“Our Syntropic farm in Zongo Macheri is the first of its kind in Ghana. We are currently developing 100 acres as a prototype, research, and training facility, with the potential to expand to 3,000 hectares.

“We provide tailor-made training on the restorative methodology to individuals and organizations. We also hope to make farming fun, easy and rewarding to people of all ages. Trainees pay a fee that enables us to continue delivering impact to our smallholder farmers,” Clement explained.

Osukuruku, a 24-year-old man, Daniel has been working as a technician and caretaker for Clement for over two years.

Osukuruku claims he can now function as a man. “With the financial support I receive from this work, I can now leave alone, and I’ve learned a lot about biodiversity.”

Every purchase will assist us in planting more trees and lifting local farmers out of poverty.

DISCLAIMER: The Views, Comments, Opinions, Contributions and Statements made by Readers and Contributors on this platform do not necessarily represent the views or policy of Multimedia Group Limited.
Tags:
Agriculture
poverty
Resilience