Requirement for MMDCE position should include a master’s degree - Nii Lante Vanderpuye - MyJoyOnline.com 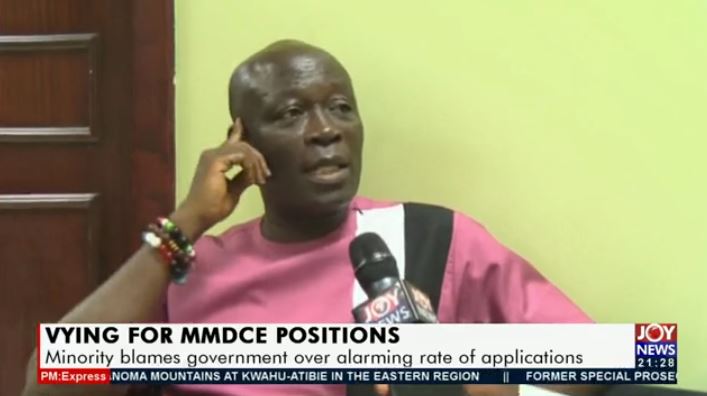 Ranking Member on the Local Government Committee, Nii Lante Vanderpuye, says the requirement for applicants vying for the post of Metropolitan, Municipal and District Chief Executives (MMDCE) should include holding a master’s degree.

This, according to him, will scare off people who are of the view that the position is a favour from the president and make way for the competent candidate for the position.

“You need someone with at least a minimum requirement or qualification, thus a Master’s degree, because that person should exhume some confidence in the people he is working with, for them to trust the competence and the capabilities of the person,” he told JoyNews‘ Kwesi Parker-Wilson.

The position this year saw about 715 people from 55 districts in the Northern Region vying for the seat, but Mr Vanderpuye said the surge is worrying.

“This time, the numbers are just alarming because we have just demined the position such a way that it has become a position of patronage.

“Everybody at all thinks that because he’s worked for the party he deserves to be the MMDCE.”

To further buttress his point, the Odododiodoo MP cited a situation where a District Chief Executive was unable to “appreciate just the small note we gave him” alleging that the person had the position as compensation to the family.

“He has no clue, he has no competence, and this is just somebody who finished secondary school. You could see that the person is so empty but he is a DCE.”

Meanwhile, a Local Government Expert, Dr Eric Oduro Osae, responding to the suggestion on PM Express Wednesday, said it is unacceptable and unlawful to ask for such requirement as the country’s constitution does to support that.

He said asking for even a minimum qualification will also be against human rights, “that would be a serious thing to do in politics and governance.”