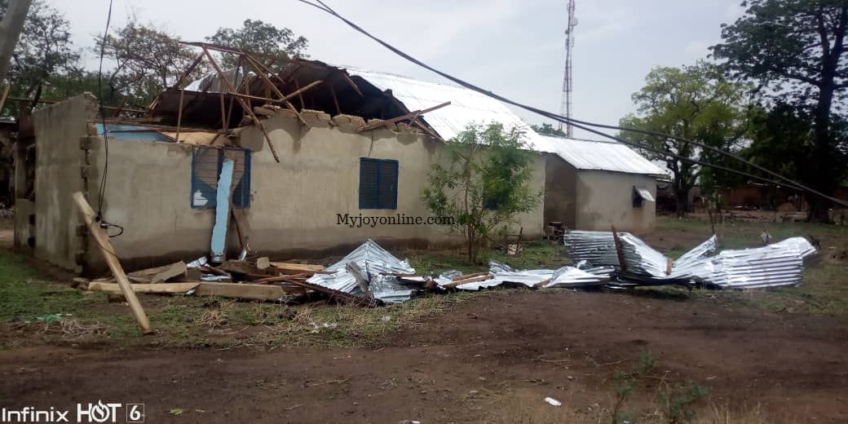 A 40-minute rainstorm has displaced about 420 residents at Yapei in the Central Gonja District of the Savannah Region.

The unforeseen disaster also affected two schools; Presbyterian Junior High Schools A and B in the area, leaving at least 300 students without a conducive environment for to study.

The stranded students expressed worry over how fast their school will be restored since their school was renovated just a week ago.

Narrating the incident to JoyNews, the District Chief Executive of Central Gonja, Mustapha Mahama said the situation has cut off some parts of the community off the grid.

He also stated that an engineer has been asked to assess the level of damage for possible renovations.

“Homes have been affected, some people had to sleep in their neighbours’ homes after the incidents and as I speak some areas do not have lights because when the wind ripped off the roofs of some houses, they cut some lines.

Mr Mahama also appealed to philanthropist, old students and Non-Governmental Organisation to assist the community rebuild its roofs that have been ripped off to give students a comfortable environment to learn.

DISCLAIMER: The Views, Comments, Opinions, Contributions and Statements made by Readers and Contributors on this platform do not necessarily represent the views or policy of Multimedia Group Limited.
Tags:
rainstorm
Residents displaced
Yapeil