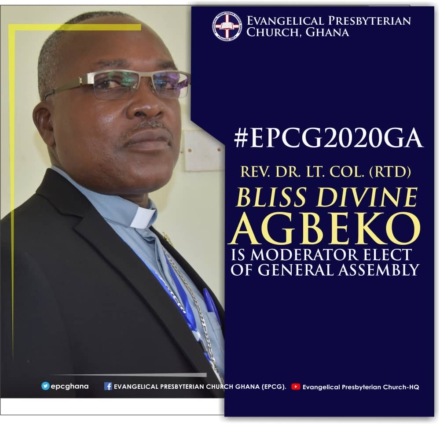 The 57-year-old Minister of God, who first served the Church as a farm labourer in 1983, was from 2016 to 2018, the Deputy Director for Religious Affairs of the Ghana Armed Forces, and is presently the District Pastor of the Accra Newtown branch of the EPCG.

In addition to holding numerous leadership positions within both civilian and military ecumenical domain, the Moderator-elect had also availed himself to serve the Church abroad.

He is a product of a number of Universities and advanced institutions including the University of Ghana, and the Erskine Theological Seminary in Due West, South Carolina, US, where he earned a Doctorate Degree in Ministry.

Rev Dr. Agbeko is a motivational speaker and has four books to his credit.

The General Assembly was on the theme “Improving Upon Our Gains Through Selflessness, Integrity, and Effective Stewardship.”

Right Rev Dr. Seth Senyo Agidi, the outgoing Moderator, said as the Church grows, there was the need for reassessment and repositioning towards serving God’s purpose.

“We need to redefine ourselves and assume our rightful positions as humans who have been called to be instruments of grace in God’s Mission,” he said.

Rev Agidi is accredited with among other achievements, setting up a five-year strategic plan to help give the Church more focus on its divine mandate, and also to make it more visible.

He had also pursued efforts by his predecessors at expanding the Church beyond the borders of the country, and had worked to enhance its development.